Start • Fuel ice will be the energy of the future: China has finally managed to extract this new source

Fuel ice will be the energy of the future: China has finally managed to extract this new source

Celebrating a lot, China is the first nation that managed to extract so-called “Fuel Ice” in super-deep waters in May.

China just won the title of first nation to extract natural gas from ice in deep and super deep waters. Affectionately nicknamed “fuel ice”, this new input is already considered the energy of the future, although many entities have warned about the consequences of this type of extraction.

Incessantly for about 8 working days in the may, China managed to capture 8,350 cubic meters a day of this new type of fuel, says Chinese Minister Jiang Daming. He also endorses that the country will finally experience a “true energy revolution”.

The head of China's Ministry of Geology, Li Jinfa, has come to the conclusion that the stocks of combustible ice in its waters are equivalent to 80,000 tons of oil, which would supply the country's energy demands for about 20 years or more.

But after all, how is it possible to extract fuel from ice?

It turns out that combustible ice is a matter made up of water and natural gas. It is found only in deep, icy waters in the marine environment.

First found in the former Soviet Union in the 1960s, this type of fuel is literally in the form of ice, but when it is melted and deprived of pressure, the water is removed, releasing natural gas. It has been produced for thousands of years by the droppings of bacteria that live deep in the oceans or in permafrost (permanently frozen ground).

There are several types of combustible ice, but China has been successful in the type  methane hydrate, which is currently the most abundant.

The research institution Efe says that this type of fossil fuel is a clean and very abundant source and that the question now is to work on the type of technology that is capable of extracting it on a large scale and that is commercially viable. 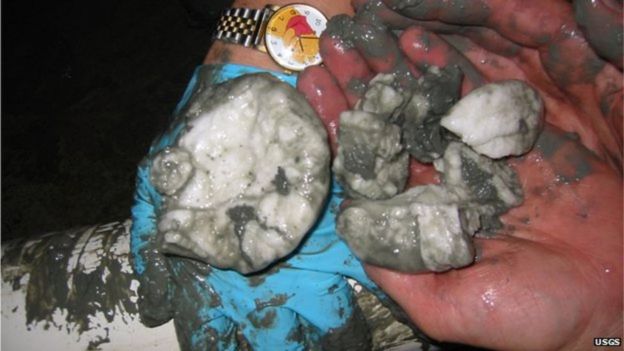 Naturally, China and Japan are very interested for 2 very simple factors: They have a colossal energy consumption but there are almost no energy sources, depending a lot on other countries to supply the energy demands of their nations, but they hope to turn this game as soon as possible.

Even so, there are still questions and fears, because it is not known what kind of impact this type of large-scale extraction would have on the environment.

Methane has a very large explosion potential and that is, in fact, an unprecedented risk! Being stronger than carbon oxide, this gas could also greatly impact global warming.

The Chinese government has said that it will prioritize the preservation of the environment. Li Jinfa said that it is no use for Eastern countries to come with “chat or pressure” of an impeding nature to the project, as this would be hypocrisy, as Western countries consume about 40% of fossil fuels in the world and many of them have already had accidents, spilling oil. at sea and destroying marine life, even humans.