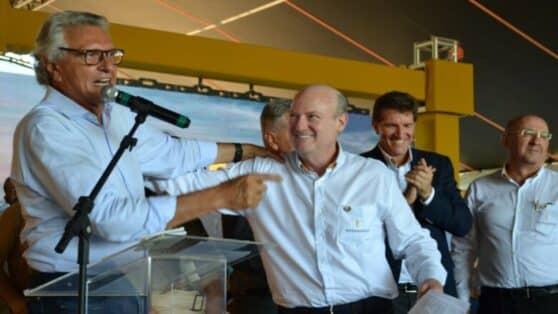 Former project of the Amarillo Gold company, Hochschild, has now received the installation license for the start of works and the exploration of gold in the mine, which will have a total investment of R$ 900 million for the production of gold.

Last Thursday (28/04), the governor of Goiás granted the Hochschild company the installation license for its new project at the Mara Rosa. The plant will have a total investment of R$ 900 million and will be the company's new bet for gold production in the state, in addition to expanding the company's presence in the Brazilian mining sector.

The gold production mine located in Mara Rosa, in the state of Goiás, was a project belonging to the Amarillo Gold company and, recently, became the property of Hochschild. Now, the company has received from the state government the necessary installation license to start the construction of the gold exploration plant, aiming to take advantage of the large ore reserves available in the state and expand production within the mining sector.

The Mara Rosa mine project will be an open pit mining operation (open pit), which is still in an advanced stage of development, with commercial production expected in two years. In addition, the Peruvian company Hochschild announced that it will make a total investment of R$ 900 million in the site. The company intends to invest in the acquisition of state-of-the-art equipment to make the gold production chain even more efficient, productive and highly profitable for the company over the next few years in the state of Goiás.

In addition to the focus on gold production and profitability for the company, the mine project will also have a strong investment in attracting new job opportunities for residents of the region. Thus, Hochschild is forecasting the creation of 1,350 direct jobs during the construction phase of the plant's construction, and another 810 in the next stage of operation. With this, the state government announced its full support for the enterprise, since it will be essential for the economic and social growth of the region of Goiás.

The investment of R$ 900 million in the Mara Rosa mine will be essential to guarantee a much more efficient and agile production chain for Hochschild. Thus, after receiving the installation license, the company announced that the initial plan of gold production is estimated at 10 years and that the enterprise should produce 102 thousand ounces of gold in the first four years of operation, and 80 thousand in subsequent years.

The company also commented on the relevance of this project for an investment in a more sustainable gold production and the country manager of Hochschild in Brazil, Edson Del Moro, stated that “Through a filtering system and dry stacking of residues, we eliminate the risks of a dam, while we reuse 85% of water, which returns to the production process in a closed circuit, ensuring more safety and protection for the community and the environment”.

The Governor of the State of Goiás, the Ambassador of Peru to Brazil, Romulo Acurio, the Secretary of Industry and Commerce of Goiás, Joel Santana, and the Secretary of the Environment, Andréa Vulcanis, were present at the meeting to grant the installation license. by the mayor of Mara Rosa, Flávio Moura.