The first fully electrically powered tanker on the planet goes into operation; measuring 62 meters and weighing 492 tons, the oil tanker promises to revolutionize the naval industry in the world 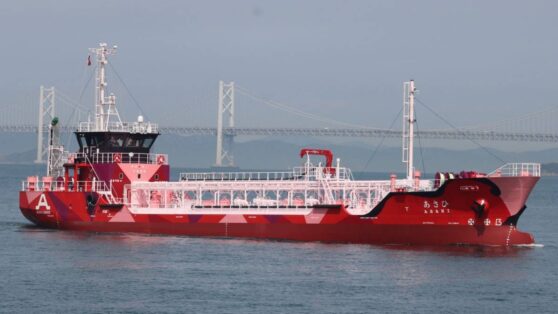 With capacity to transport 1,277 m3 of fuel, the first oil tanker clean energy in the world was built at the Kawasaki shipbuilding yard

The world's first electrically powered tanker went into operation in last Wednesday (27/04), in Japan, after several weeks of tests and demonstrations. The 492-ton tanker is powered entirely by large-capacity lithium-ion batteries, making it carbon-free in its operations. The ship asahi operated by Asahi Tankers, it is in commercial service, but is also seen as a demonstration vessel contributing to the development of battery-powered ships.

The designs for the bunker ship were developed in cooperation with Japan's e5 Laboratory as part of their effort to develop zero-emission ships and through the use of technology to improve the working environment on board the ship. It was launched in December 2021 by Japanese shipbuilder Koa Sangyo and delivered to its owners Asahi Tankers on March 30.

The second electrically powered tanker in the world has already been ordered, it will be built at the Zosen KK shipyard and is expected to be delivered in March 2023.

Measuring 62 meters in length, the tanker has the capacity to transport 1,277 m 3 of fuel, providing fueling operations in Tokyo Bay. On April 26th, the asahi powered the Mitsui OSK Line-operated car transporter Victorious Ace at Daikoku Pier C-1 Wharf in Yokohama. According to the companies, this “marked a commemorative moment for the company’s first bunkering operation. asahi“.

The vessel's energy is stored in a lithium-ion battery developed by Corvus Energy with the propulsion system built by Kawasaki. They reported that the battery has a capacity of 3,480 kWh, providing all the power needed for navigation, berthing and cargo handling. The ship is powered by two 300kw azimuth thrusters and also has two 68kw side thrusters. The tanker has an operating speed of about 10 knots and a range of approximately 100 miles. It will take about 10 hours to fully recharge the batteries.

Since delivery in late March, the ship has undergone power tests first at the shipyard and then at its newly built power plant in the city of Kawasaki. The specially designed plant refills the container. As part of the project developed by e5 and Kawasaki, the asahi it can also serve as a power source designed to provide support in emergencies or natural disasters.

The ship drew large crowds of spectators, along with shipping industry officials who inspected it during its previews last week. In addition to zero-emission operations, Asahi reports that the tanker offers a more comfortable working environment with less noise and vibration than traditional vessels. They also expect reduced requirements for engine maintenance.

Asahi contracted for the construction of a second electrically powered bunker tank. The vessel will be built at the Zosen KK shipyard and is expected to be delivered in March 2023.