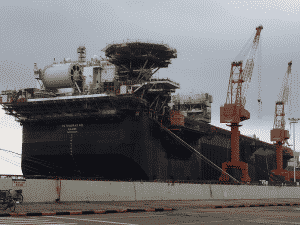 The first among many works to come, the Jurong Aracruz shipyard celebrates this new step towards resuming activities.

[supsystic-social-sharing id='1′]With our shipyards scrapped due to the economic crisis that hit the entire shipbuilding and assembly, finally a prelude to optimism begins in the sector. the Jurong Aracruz shipyard has just won a contract to assemble the FPSO P-68 in the CARRY OVER modality, which opens a range of new precedents for the economy and for those who are professionals in this field. The following is the transcript of the article from the website. petronews

“In difficult times for the Brazilian naval sector, at least good news. Estaleiro Jurong Aracruz (EJA), in Espírito Santo, which belongs to the Sembcorp Marine group, from Singapore, won a contract worth US$ 145 million for carry over work on the FPSO P-68.

The contract was signed with the Tupi BV consortium, which is formed by Petrobras Netherland BV, BG and Galp. In July 2012, Tupi BV awarded EJA the contract to build modules and integrate the P-68 platform ship.

The vessel will operate in the pre-salt layer of the Santos Basin, with a production capacity of 150,000 barrels a day. The unit will be able to store up to 1.6 million barrels of oil and will operate in a water depth of 2,200 meters.

The hull, which was built at Estaleiro Rio Grande, in Rio Grande do Sul, weighs 52,000 tons, is 288 meters long, 54 meters wide and has a depth of 31.5 meters (height from the bottom of the tanks to the main deck) .” Source: PetroNews

Tags:
previous post Shell will inject more than 6 billion reais in Brazil and brings a light of prosperity
next post Closed process