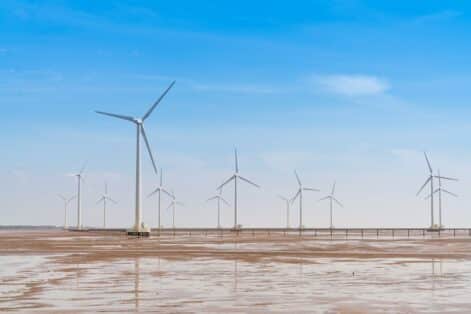 The turbine also works as a way to promote clean energy, since one of its main representatives is wind energy.

Wind energy, as the 2022 report by the British consultancy Ember found, is the second largest source of clean electricity on the planet. With regard to Brazil, this matrix is already the second largest energy producer in the country, accounting for 10.8% of production. Brazil occupies the sixth place among the countries in the world in the ranking of total installed capacity of wind energy onshore, according to data from the Global Wind Energy Council.

Currently, there are numerous structures aimed at harnessing the force of the winds to generate energy, whether the large turbines from Mingyang Smart Energy, which have 118-meter-long blades, or cylindrical turbines without blades, such as those of Vortex, or even even the modern floating structure of the Windcatcher, which is made up of dozens of small rotors.

In this context, mechanical engineer Cat Adalay and designer Rachel Carr, both Canadians working for Aurea, made the decision to create a portable wind turbine so that more individuals would be able to directly access this clean mode power. Thus, Shine was born, which gives its users the opportunity to generate their own clean energy, regardless of any weather and temperature conditions.

The Shine turbine has an internal battery of 12,000 mAh of 5V, in addition to a capacity of 40 W. It can recharge and supply power to portable electronics, such as cell phones, tablets, cameras, flashlights, among others. The turbine weighs 1.3 kg and takes only 2 minutes to assemble, so when ready it is the size of a 1 liter water bottle.

Depending on the intensity of the winds, your device charging time varies. If they are strong, the turbine recharges a cell phone in just 20 minutes. On the other hand, if the winds are of medium intensity, the recharge time is increased to about an hour. Finally, if there is only a light breeze, the charging time will average twelve hours.

The portable shine turbine is therefore perfectly suited to those who spend a lot of time outdoors, and is being sold on the Indiegogo crowdfunding platform for around $325, with deliveries expected to begin in October.

Renewable energy: Brazil reaches sixth place in the world ranking of wind energy potential and has excellent results with the solar source

Published on Monday, April 4th, the report by the Global Wind Energy Council (GWEC) details and analyzes in a complete way the scenario of the global wind energy sector. As shown by the Brazilian Wind Energy Association (Abeeólica), it is seen that Brazil rose one position in the Ranking of Total Installed Capacity of Onshore Wind Energy in 2021, now occupying sixth place. In 2012, Brazil was in 15th position, and last year it was consecrated the third country to install more wind power plants, according to the GWEC.
In the 2021 installed capacity ranking, Brazil reached 21.5 gigawatts (GW) of installed capacity in onshore wind power plants and occupied the number 6 position, behind Spain (28.3 GW); from India (40 GW); from Germany (56.8 GW); the United States (134.3 GW) and China (310.6 GW).
According to the website Exame, in the global context, the Global Wind Report 2022 of the Global Wind Energy Council highlights that the planet's capacity expanded by 93.6 GW last year, bringing the accumulated wind energy capacity to a total of 837 GW, from in order to demonstrate the annual growth of 12%.
For more information, click here to read this article in full.

Tags: Wind EnergyRenewable energywind turbines
previous post More job openings at Termelétrica Marlim Azul 1 in Macaé with Techocean in charge of hiring and with an alternative method for sending resumes
next post OPEC announces increase in oil production to 432,000 barrels a day to expand supply of the commodity in June