per Roberta Souza
-
–
in Wind Energy 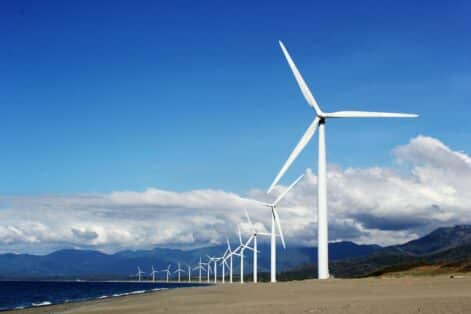 The Fontes dos Ventos II wind farm is located in the Sertão extension where the first solar and wind farm in Brazil operates.

It is in the Sertão de Pernambuco, in the municipality of Taracatu, that the new wind farm, Fontes dos Ventos II, is being inserted.
The renewable power plant has a capacity of 99MW and has received around R$430 million of capital to be developed.

The building located in the same region of the Sertão de Pernambuco as Enel Green Power, a company that produces electricity from renewable sources, has been operating since 2015 the first hybrid solar and wind farm in the country, joining the Fontes dos Ventos I wind farm and the Fontes Solar project.
The Fontes dos Ventos II plant is part of a project of new Enel plants that were built during the pandemic.
In addition, strict safety protocols were complied with in accordance with the sanitary specifications provided, in order to guarantee the safety of the workers involved in the construction of the wind power plant, as well as the well-being of the Sertão community, where it is located. Enel also introduced some actions to favor the population around the wind farm, such as offering rural technical advice to around 60 farmers, workshops with agroecology techniques for families and encouraging the practice of family farming. One of the workshop's beneficiaries, farmer Ivone Cosma dos Santos, 39, says: “I learned how to make organic compost to fertilize the soil without having to use synthetic fertilizer. I also learned how to make a natural syrup to kill pests. I applied this syrup to the acerola and soursop tree and it was wonderful because I didn't have to buy poison”.

The start of activities at the Fontes dos Ventos II wind farm is a symbolic milestone for the expansion of renewable energy sources in the Sertão and the country in recent years.
“We are expanding our installed wind capacity in a region where we have been present for years. Long before the recent resolution of the regulatory agency for the development of hybrid plants in the country, we installed in that region of Pernambuco a pioneering project, with a wind and solar park built side by side. It was a project that generated important lessons learned for the company and for other agents in the sector, in order to allow the study of opportunities for complementary sources and encourage the regulation of associated projects”, says Roberta Bonomi, responsible for Enel Green Power in Brazil.

The wind farm has 18 wind turbines that together will be able to generate more than 421 GWh of energy annually. In a sustainable way, the energy production of the wind power plant is capable of preventing the emission of around 230 kilotons of CO2 per year, in addition to avoiding the expenditure of 97 million cubic meters of gas per year that will be replaced by clean renewable energy produced in the country. The energy produced at the wind farm is supplied to the free market to sell to commercial customers through Enel Trading, a trader belonging to the group. Also, in July 2021, Enel established, for the next 15 years, a partnership with Lojas Renner to complete the energy demand of 170 stores and 1 distribution center of the brand with clean energy developed at the wind farm.

In partnership with an Australian company, Ceará makes an investment of R$ 50 billion in an offshore wind farm

After offshore energy, that is, on the high seas, was regulated in Brazil, projects began to emerge quickly. The state of Ceará was the pioneer and one of the protagonists in this new modality, with the project of the Maritime Wind Power Plant in Acaraú, a municipality on the west coast of the state. One of its planned investments in offshore wind energy is in imminent progress as the signing of a memorandum of understanding is about to take place. To know more, click here and also read this full article.

Tags: Renewable energyPE - Pernambucowind farm
previous post CADE grants CSN the necessary guarantee for the acquisition of Metalgráfica Iguaçu, as a way of boosting the production of metallic packaging
next post Nissan and NASA team up to revolutionize electric car batteries in the world: solid-state batteries will be so stable they can be used in pacemakers and promise to charge EVs in just 15 minutes