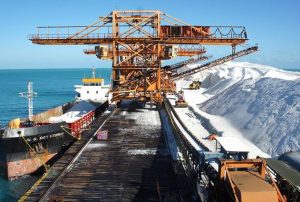 Fight to free the Areia Branca Salineiro Terminal – Codern travels to Brasília in an attempt to reverse the shipment carried out by Ibama.

Known as the Port of Areia Branca, in Rio Grande do Norte, the Areia Branca Salin Terminal was embargoed by IBAMA (Brazilian Institute for the Environment and Renewable Natural Resources) due to pending issues and irregularities found during inspection. Responsible for more than 60,000 jobs, Fernando Dinoá, president of Codern (Companhia Docas do Rio Grande do Norte), went to Brasília on July 13 to talk to the Ministers of Transport and the Environment, taking a series of measures to reverse the current situation.
[adrotate banner=”10″]

Concerned with the current situation of the Port of Areia Branca – RN, President Dinoá presented the action plan to release the Terminal and was very positive. Confident that the necessary actions have already been taken Dinoá has the help of the Ministry of Transport and the National Secretariat of Ports. O Areia Branca Salin Terminal, needs to return to work as soon as it is of extreme importance for the economy of the State of Rio Grande do Norte, adds the president.

Present at the meeting in Brasilia

In addition to Dinoá, the meeting in Brasília was attended by:

This was not the first time the Areia Branca Salin Terminal was banned. The Ministry of Labor and Employment, due to the list of irregularities found by the tax auditors of the Mobile Port and Waterway Work Group (December 2017).

How about taking advantage of these opportunities? Oil and gas steel company discloses many vacancies and works without fear in Brazil

Tags:
previous post Oil and gas steel company discloses many vacancies and works without fear in Brazil
next post Lying on your resume can get you fired for just cause.