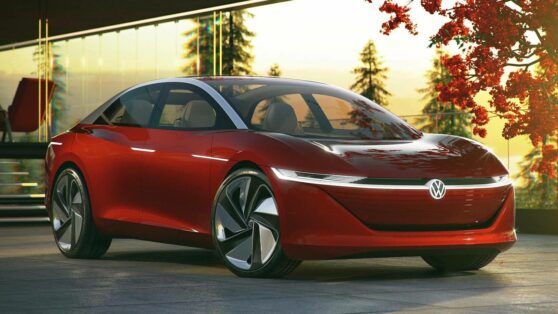 Sedan will have exemplary aerodynamics, rear or all-wheel drive and should retire the Passat in Europe – image: VW/Disclosure

Volkswagen is working on further changes to its MEB electric car platform and plans to bring a new electric sedan capable of reaching 700 km of range on a single charge.

Volkswagen continues to work on the development of its MEB electric car platform and one of the next innovations in this architecture announced on Wednesday afternoon (13) will be a electric sedan of medium size, being the first of the brand, which will serve as a successor to the current Passat, however without emitting any pollutants and which promises to make a big leap in terms of autonomy. Until then, Volkswagen's platform has already provided the basis for models in the ID line, such as ID.3, ID.4, ID.5, ID.6 and ID. Buzz, however, the future electric sedan promises to go one step further.

Known as Volkswagen Aero B, the electric car did not have much technical data released by the German automaker, however during the last results conference the company released some important data about the electric sedan.

At the same time that it exposed its future electric vehicle that will have improved autonomy, the automaker declared that its next model will be built on the updated version of the platform and will offer a range of up to 700 km on a single charge. However, the company did not mention the battery, but the expectation is that it will be greater than 100 kWh.

In addition Volkswagen also stated that its next electric cars will be capable of fast charging with 200 kW of power, which represents a great evolution from the current 150 kW of maximum power, which is available for vehicles like the ID.5 GTX, with the other ID line models can reach 135 kW.

Following the examples of the ID.4 and ID.5 models, Volkswagen's new electric car may have a sporty version, probably named GTX. In relation to the newly launched SUV-coupe, the more powerful version allows the vehicle to go from 0 to 100 km/h in 5.5 seconds.

The definitive design of the electric sedan is not yet known, however the model has already been spotted in tests and a good part of what the definitive design will look like has been revealed. The presentation of the final version is scheduled for the end of this year, with arrival on the market as early as next year.

Volkswagen did not specify the range standard, but it is very likely that the company was guided by the WLTP standard, which is a harmonized worldwide Vehicle Testing procedure. The platform used by the electric sedan was created in 2015 and aims to take advantage of the latest advances in battery cell construction.

Volkswagen speaks out on semiconductor crisis

The expectation is that the Aero B electric sedan will compete with vehicles such as Tesla Model 3, Polestar 2 or even with the all-electric version of the BMW 3 series, the new i3 Sedan.

The last few times it was seen, the Aero B was using a different type of camouflage and still had a similar front end to the Passat. According to Arno Antlitz, the brand's financial director, apart from Volkswagen's adjustments to the MEB, the automaker is also preparing for the prolongation of the semiconductor crisis.

The director stated that the situation should not improve significantly within 2 years and the crisis should reduce in the second half of this year, however without ending structural problems. Antlitz's statement is in line with that of BMW's global president, Oliver Zipse, who sees the current moment as the height of the semiconductor crisis.

Tags: autonomyelectric carEletric carsVolkswagenVW
previous post Energisa opens enrollment in a free course for training electricians in MG
next post Ford announces the opening of 50 in-person and home-office internship vacancies for candidates with no experience