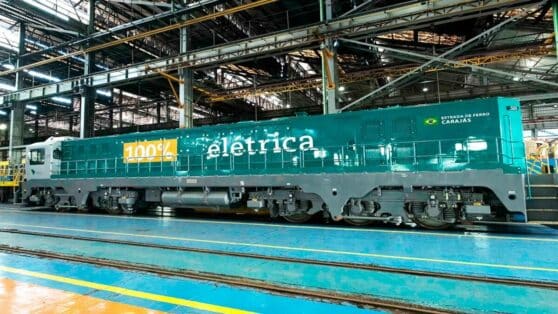 The mining sector is increasingly looking for more sustainable alternatives for operations and the start of mineral exploration at the Ponta da Madeira Terminal mine with Vale’s electric locomotive represents a major step in this initiative.

The mining giant, Vale has this Tuesday, (05/03), its second electric 100% locomotive already in operation at the Ponta da Madeira Terminal mine. The operation of company is located in the region of São Luís, in Maranhão, and now has much more sustainability and environmental commitment, since the locomotive reduces the emission of polluting gases in the transport and flow of cargo.

At the end of April, the company Vale finally received its second locomotive that runs on 100% on electricity to make its operations even more sustainable. The structure benefiting from the equipment is the Ponta da Madeira Terminal mine, which will now be able to take advantage of all the benefits that this equipment will bring to the flow and transport of the production carried out by the company on site.

Vale's locomotive was manufactured in China by CRRC Zhuzhou Locomotive (CRRC ZELC), and has batteries made of lithium that have a storage capacity of 1000 kWh, with autonomy to operate for up to 10 hours without stopping for recharging. This is one of the most modern technologies for supplying a mining locomotive, aiming at a drastic reduction in the emission of polluting gases into the atmosphere. Thus, Vale seeks to further diversify its fleet with the acquisition of the CRRC locomotive this week.

Vale's mine and rail segments account for ¼ of the company's total carbon footprint, and with this new acquisition for the Ponta da Madeira Terminal, the company will have the resources to change that. Thus, the locomotive will be able to circulate freely through the company's structures without worrying about the environmental impacts caused by the supply of the equipment. And now, Vale intends to continue with its investments in attracting new, more sustainable alternatives within its production in the mining sector.

Over the last few years, Vale has shown itself to be increasingly integrated in mineral sustainability and, during 2019, the company announced the goal of zeroing its net emissions from scopes 1 and 2 by 2050. In this way, the company is investing between US$ 4 billion and US$ 6 billion in various projects and initiatives that contribute to this plan. With this, the acquisition of the electric locomotive is another step taken by the company within its decarbonization initiative.

Thus, the executive manager of EFC, João Silva Junior, reinforces Vale's commitment to the global environmental agenda and states that “The arrival of the electric locomotive at EFC is an important milestone for our Zero Carbon journey at Vale. We are building a robust plan that will allow us to drastically reduce CO2 emissions from our rail operations. We are increasingly reaffirming our commitment to a more sustainable Vale”.

The locomotive is already at the Ponta da Madeira Terminal mine, in São Luís, and will undergo a 90-day test period to guarantee safety in the maneuvers. After that, the company will be able to use the equipment at full steam for production in the mining sector in the region.

Tags: Electric LocomotiveMineSustainabilityPonta da Madeira TerminalOK
previous post VLI and Embrapa team up for an agribusiness development project focused on innovation and sustainability in the sector
next post Petrobras fails in the sale of the fertilizer factory (with works stopped since 2014) to the Russian group Acron and multinational Unigel enters the UFN3 bidding dispute