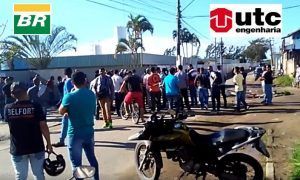 Insurgencies between BR and UTC Engenharia resulted in the collective dismissal of around 2000 employees directly from the service providers. “This gang rape” (I couldn’t find a better expression to define this unilateral situation) was already a conversation that had been going around on social media and in conversation circles between company employees for some time, but like no one at the top of the company didn't release any communiqué, nobody knew for sure what was going on.

Yesterday (10) the employees went to the company already fearing the worst after a collective call, see in the photo below the "Legal Telegram of Gugu" that the employees received. Click to enlarge the photo:

Employees immediately began to revolt and protest, including closing the street and setting up barricades to prevent access until the situation was clarified. Soon after, the union of the category arrived and began a series of intermediaries to find out what was happening. Also taking the opportunity to congratulate the union for bringing snacks and coffee for free to former employees who were in front of the company from an early age.

Some time later, when nothing could be done there, a march and demonstration was organized in front of Petrobras in Macaé, but for BR this was also worthless, as this is a complex issue and can take a long time. .

The reasons for this mass layoff

According to an official statement from Petrobras yesterday, the amounts that were no longer transferred to UTC refer to administrative and operational improprieties in 2011, at the Alberto Pasqualini Refinery (REFAP), besieged in the state of RS.

UTC, on the other hand, states that these values are not consistent with current contracts and have nothing to do with operations in the Campos Basin. Lacking financial resources, the company was forced to lay off employees en masse.

Consequently, the operations and activities that are under the responsibility of UTC on platforms and rigs in the Campos Basin will be interrupted. Many employees are expecting the worst. Petrobras said that it will sue the contractor in court, because this attitude is inconsequential and directly affects the worker who has nothing to do with history.

Washington Annunciation who was one of the fired, our friend and page follower CLICK OIL AND GAS, said that the company did not deposit the FGTS nor the INSS, the payments for the month of July have not been ordered yet. Pessimistic and sad, he is desolate because he has a family to raise and is paying for his apartment. This is the reality for many in this situation.
The two companies will be negotiating until the weekend, and if nothing is agreed favorably, another 2000 employees will be laid off. What remains now is to wait for this story to unfold.
Don't forget to like our OFFICIAL FANPAGE, news and vacancies in the sector is here.