To meet the high demand for the flow of grain production, Porto do Itaqui expands liquid bulk terminals 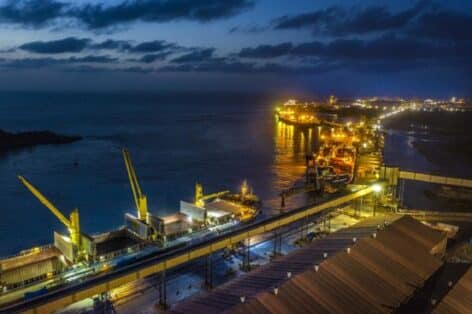 The Port of Itaqui closed the first quarter of 2022 with 6.2 million tons of cargo handled – image: Jornal Pequeno/Reprodução

Porto do Itaqui is expanding its liquid bulk terminals to meet the demands of high grain production, which is up by 5% compared to last year.

The Port of Itaqui closed the first quarter of this year with 6.2 million cargoes handled, representing an expansion of 5% compared to the same period last year. The highlight goes to the volume of soybeans, which expanded by 29%, and corn, which grew by 137% compared to the first quarter of last year. In March alone, the Port of Itaqui handled 2.5 million tons of cargo at its liquid bulk terminals, the best March in the history of the port of Maranhense. In addition, high grain production also had a record in soybeans, with 1.48 million tons of the product, surpassing the 2015 mark, when 1.43 million tons of soybeans were handled, and in oil derivatives for the domestic market, with 393.9 thousand tons.

According to data from Brazilian Institute of Geography and Statistics (IBGE), Brazil should break a record in grain production this year, with an estimated harvest of 258.9 million tons. The estimate from the Systematic Agricultural Production Survey (LSPA) was released last week.

In order to meet the flow needs of this grain production, as well as the entire agribusiness logistics chain, which also involves the fertilizer and fuel chain, the Port of Itaqui is expanding its liquid bulk infrastructure and investing in technologies so that more productivity and consolidation are guaranteed for the various busy production chains.

With Tegram expanding, which includes, in addition to VLI terminal, the two cradles of simultaneous activity, the expectation is to close this year with a volume greater than 13.9 million tons of grains handled.

A possible retraction in fertilizer imports, which comes mainly from Russia, due to the war with Ukraine, should be offset by higher volumes imported from new markets such as Morocco, Canada, Egypt, Tunisia and Iran.

Throughout this year, the expansion of liquid bulk terminals is underway to meet the great demand of grain production. Investments will be made in rail accesses, with the development of the rail loop project (long and medium term).

At the beginning of this month, the expansion of Granel Química's terminal 1 in Porto do Itaqui was delivered, increasing its storage capacity to 96 thousand m², which represents an increase of approximately 30%. It is estimated that 9.2 million tons will be handled.

Berth 99 was also delivered this month, an investment by Suzano in the public port, which includes a warehouse nearing completion. In an auction 4 years ago, the company secured the right to invest and explore the area for 25 years, renewable up to a maximum of 70 years.

Therefore, it will be possible to expand the export volume of pulp produced in the municipality of Imperatriz. In addition to the private investments in the Port of Itaqui, EMAP announced a package of R$ 500 million to be executed over the next three years.

The package includes projects in the technology, sanitation, quay structure works and a set of projects to strengthen the port's cargo handling capacity.

Tags: expansioninvestmentsMA - MaranhãoPort of Itaqui
previous post Multinational Siemens Energy designs in Brazil and launches globally innovative transformer, with a high level of fire safety and no risk of explosion, aimed at the electrical grid of the entire region of the Americas
next post Producer of sugar and ethanol, Raízen added 10 thousand professionals and 9 units that belonged to Biosev