per Junior Aguiar
-
–
in courses 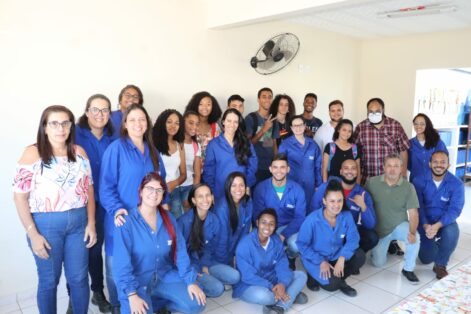 The Thermoelectric Power Plants in Schools project is the result of a partnership between professors who are specialists in electric energy together with entrepreneurs to promote information and training to students in the public school system in Rio de Janeiro. The initiative began in March of this year at the state school Visconde de Araújo, in Macaé, known as the national oil capital. And as of 2023, it should expand to the municipality of Campos de Goytacazes, the first city to have public electricity supply in Latin America.

On April 4th, representatives of the Thermoelectrics in Schools project met with teachers and managers of the Constantino Fernandes school in Campos dos Goytacazes. On the occasion, the project was presented and received with great enthusiasm. The on-site classes will be coordinated by the professor and one of the biggest supporters of the project, Luiz Fernando Rosa Mendes, from the Instituto Federal Fluminense Guarus campus.

Present at the meeting, one of the creators of Termelétricas nas Escolas, Pedro Costa, says he is quite happy with the expansion of the project. “I was very happy for the reception of the teachers and direction of Colégio Estadual Constantino Fernandes to embrace the project. They understood the purpose of our project in relation to electricity", account.

The first public public lighting service in Brazil – in South America – was inaugurated by Dom Pedro II in Campos dos Goytacazes, four years after the arrival of electricity in the country. At that time, electricity was generated by steam from wood-fired boilers.

How does the Thermoelectrics in Schools project work?

The Thermoelectric in Schools project has lectures/classes in four modules and distribution of handouts, as well as videos that contribute to the classes, technical visits, so that students have an immersive experience about energy generation in Brazil.

This Thursday (28), the young people visited the Tesalab laboratory that performs analysis of water and effluents from offshore and onshore companies in the Macaé region. The visit was coordinated by Pedro Costa, Danilo Galvão and accompanied by Professor Margareth Ramos. On the occasion, it was possible to understand how microbiology analyzes are carried out, oil analyzer (TOG), sanitary effluents, hardness and alkalinity

“In most state schools there are no chemistry laboratories, making it even more difficult for the poorest student to learn”.

After completing the modules, students are submitted to a test on citizenship and other subjects related to electric energy covered in class. Young people still create a project on alternative electric energy, such as wind and solar, thus encouraging them to understand the concept of clean energy and its importance for a sustainable society.

In addition to the Visconde de Araújo state school, the Thermoelectrics in Schools project is currently taking place at the Télio Barreto and Raquel Reide teaching units in Macaé. Four other cities are also interested. They are: Carapebus, Cabo Frio, Itaburaí and Petrópolis.