Brazilian oil giant Petrobras will invest more than R$ 80 billion in the Campos Basin: stage for the largest offshore industry revitalization project on the planet

per Flavia Marinho
-
–
in uncategorized 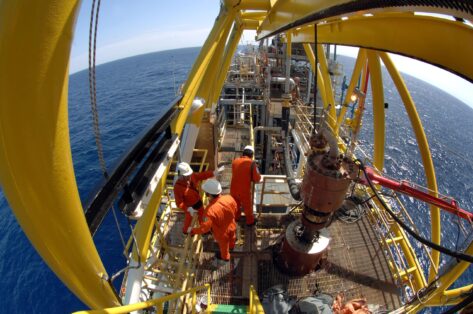 Petrobras plans to install three new platforms by 2027 and connect more than 100 oil wells, in its Campos Basin renovation plan.

Petrobras announced in a material fact to the market on May 3 that it will invest US$ 16 billion (more than R$ 80 billion at the current exchange rate) in the Campos Basin renovation plan, with a forecast of installing three new platforms and interconnecting more than 100 wells in the area over the next five years. With more than 40 years of history and two awards received by Offshore Technology Conference (OTC) for technological advances in the Marlim (1992) and Roncador (2001) fields, the Campos Basin maintains a prominent position as an innovation hub and points to the future: today it is the stage of the largest revitalization project of the offshore industry worldwide. This statement was made by the executive manager of Petrobras' Strategy, Eduardo Bordieri, who presented, this Tuesday (3/05), the company's main investments in the area, during the Offshore Technology Conference (OTC).

According to the report, in the coming years, Petrobras will adopt new technologies for the revitalization of mature assets in the area and decommissioning of its oil platforms – which is the process of deactivating the units when they end their life cycle. “In 2021, the Campos Basin accounted for about 25% of Petrobras' total production. The company plans to reach, in 2026, a volume of 900 thousand barrels of oil equivalent (boe) in that basin, with the entry into production of three new systems. This volume represents about three times the production that we would have achieved if we had not invested in the new platforms. In other words: without the new projects, our future production in the basin would be 300,000 boe”, explained Bordieri

Petrobras plans to install three new FPSO-type platforms (floating oil production, storage and transfer systems) in the region in the coming years. The FPSOs Anita Gabribaldi and Anna Neri will be installed in the Marlim field and will have a joint production capacity of up to 150,000 barrels per day (bpd). The third unit planned is Maria Quitéria, in Jubarte, in the Parque das Baleias complex, in the Espírito Santo portion of the Campos Basin, with a capacity of 100,000 bpd.

The basin accumulates a series of expressive results. To get an idea, Petrobras broke, there, a national record in the time to build a well in deep water, reaching the mark of 35 days, in the Marlim field, in the Campos Basin. For comparison purposes, the previous record in the country was 44 days, set in 2021 at the Golfinho field, in the Espírito Santo Basin. In Marlim, the historical average in the last 20 years in the construction of wells was 93 days, indicating a reduction of 63% in this period. “This performance demonstrates our economic resilience in well designs, in addition to our technological advancement in new well models, faster and more optimized than conventional ones,” said Bordieri.

According to its Strategic Plan 2022-2026, Petrobras has the ambition to add a volume of 20 billion boe to its reserves by 2030, with 5 billion boe coming from the assets operated by Petrobras in the Campos Basin. This projection is the focus of the strategic program called RES-20, totally focused on expanding the company's reserves.

Tags: Campos BasindecommissioningoffshorePetroleum
previous post Jundiaí, a municipality in the state of São Paulo, is offering more than 1,400 job openings
next post Aiming at opening up the natural gas market, the government shows support for the CNPE resolution