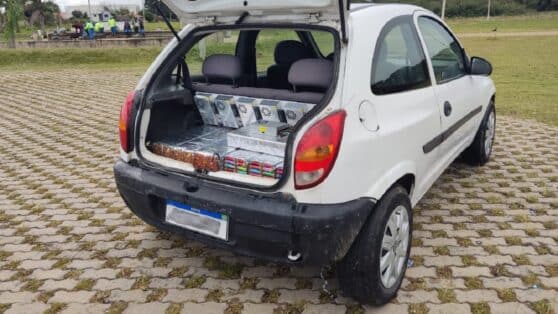 Crazy project uses industrial electric motor that will be powered by 500 laptop batteries to be environmentally friendly – image: Reproduction / Mobiauto

In Paraná, an automation technician turned his regular 2001 Chevrolet Celta into an electric car, using only recycled notebook batteries and a 12.5 horsepower industrial motor.

With the great success of eletric cars, which are gaining more and more space in the country, curiosity about them also increases. Unfortunately, for the time being the prices are still not so affordable, and it is likely that it will take time for the sustainable vehicles become popular here. One of the outputs is the electrical conversion that even drew attention last Friday (22) on social networks. Tiago Slaga, automation technician from Paraná, transformed a 2001 Chevrolet Celta into an electric car. So far, everything is normal, but the big difference is that the vehicle is powered by notebook batteries.

According to Tiago Slaga, the idea came about after watching some similar conversion projects on the internet. Working with industrial maintenance, Tiago wondered if it would be possible to adapt an industrial engine to a vehicle, as he had not seen anything like it until then.

It was then that he decided to start some bench tests and verified the possibility of powering the industrial motor through notebook batteries, using a frequency inverter.

This was the incentive that the Paraná coach needed to put the whole plan into practice. However, before turning the 2001 Chevrolet Celta into an electric car, it had to make some adjustments. According to Slaga, the first step was to remove the combustion engine original to take all the measurements and make the flange, which couples the engine to the gearbox. This was a tricky part, as everything had to be lined up nicely.

In the first attempt to make the Chevrolet Celta 2001 run, the technician used lead batteries in the trunk. It worked, but the autonomy was very low, about 15 km, in addition to taking a long time to charge.

That's how Thiago increased the number of batteries, solving the autonomy problem, but the vehicle ended up being too heavy. The car managed to run 1,000 km with the batteries, but they lost autonomy over time and became unsuitable for use. The only solution would be lithium-ion batteries, but these are very expensive, making the project unfeasible. It was then that he began to consider the use of recycled cells from notebook batteries in the electric car. It was basically a year of searching for batteries, disassembling and testing each cell.

Currently, the owner uses 455 notebook batteries and plans to expand to 500 units, which is equivalent to 3,000 cells for recharging. These batteries ensure that the Chevrolet Celta 2001 can run up to 100 km on one charge. The industrial motor can deliver up to 12.5 horsepower, and the batteries take 10 hours to charge from a 20A residential outlet.

According to the engineer and electric vehicle specialist at Brazilian Association of Automotive Engineering (AEA), Ricardo Takahira, using recycled or used notebook batteries is dangerous.

Although they are the same on the outside, inside their compositions are different and, if it exceeds 60º C, there is a great risk of fire. Ricardo says that conversions are worrying, but enthusiasts cannot be discouraged.

Therefore, it is ideal for the project owner to use the correct procedures and materials when converting their vehicle into an electric car, in addition to collecting the vehicle's regularization and documentation.

Tags: batterieselectric carEletric carselectric cars in BrazilCelticChevroletPR - Paraná
previous post Volvo partners with startup StoreDot to produce extremely fast-charging batteries
next post Eneva and Alvopetro notify the ANP about the natural gas reserve in the Parnaíba and Recôncavo basins after drilling wells at the site