Suspension of multinational Modec came to an end last Saturday (30/04): Japanese is already released to participate in future Petrobras tenders! 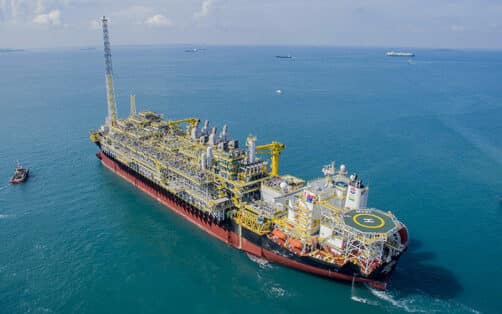 One of the main reasons that led Petrobras to suspend the Japanese company Modec from bidding was an emergency disembarkation of professionals, due to a crack in the hull of the platform, which generated a leak of 1,200 liters of oil.

The oil and gas multinational Modec is already authorized to participate in Petrobras' bids.  Last Saturday (04/30), the suspension of the 13-month period, by the Japanese company, in Petrobras' bids, came to an end. At the time, the multinational Modec was punished by the Brazilian state-owned company for the low performance in the operations of three FPSOs: City of Rio de Janeiro, City of Santos and City of Niterói.

One of the main reasons that led Petrobras to suspend the Japanese company Modec from its bids were the problems experienced in the FPSO Cidade do Rio de Janeiro, located in the Espadarte field. In 2019, the platform suffered an emergency disembarkation of professionals, due to a crack in the hull of the unit, which led to the leakage of 1.2 m³ of residual oil (1.2 thousand liters) in the Campos Basin.

Although Modec's suspension from participating in Petrobras' bids came into effect at the end of March last year, the punishment did not impact the current contracts between the oil giants. Currently, Modec is building two FPSOs for the state-owned company, Anita Garibaldi (Marlim) and Almirante Barroso (Búzios).

According to the portal Petronect, the Brazilian oil company is bidding for the contracting of the FPSO P-80, which is due to be delivered on May 16.

Petrobras is the world leader in FPSO operations and is the company that will install the largest number of platforms of this type in the next five years; units will be installed in the pre-salt and post-salt

Petrobras informed the market in a relevant fact that the recent discoveries of oil in the pre-salt, in the areas of Alto de Cabo Frio Central and Aram, open up a horizon of new exploratory opportunities for Brazil. The discoveries are the result of intensified exploratory efforts by the Brazilian oil company, which has planned to invest US$ 5.5 billion in this segment over the next five years. This statement was made by the executive manager of Strategy at Petrobras, Eduardo Bordieri, who presented the panel “Petrobras perspectives on O&G double resilience” during the Annual Breakfast Offshore of the Brazil-Texas Chamber of Commerce (Bratecc), on 4/05, a parallel event to the Offshore Technology Conference (OTC) in Houston (USA).

Of the total investments programmed by Petrobras' Strategic Plan in new exploratory frontiers, the Southeast Basins (including the pre-salt prospects) will receive 58% of the resources; the Equatorial Margin, 38%, and the other areas, 2%. "All Petrobras investments seek dual resilience: both economic (considering viable projects from a financial point of view with the price of Brent at US$ 35 in the long term) and environmental (projects with low carbon emissions)”, summarized Bordieri.

Petrobras will put into production 15 FPSO-type (floating oil production, storage and transfer system) platform ships in the next five years. Of this total, ten will be installed in the pre-salt and five in the post-salt. According to Bordieri, the company has already put a total of 32 FPSOs into operation over its most recent history, a record in the oil industry. “Today Petrobras is the leader in the operation of FPSOs in the world and is the company that will install the largest number of platforms of this type in the next five years, generating value for our stakeholders”, said Bordieri.

Tags: FPSOModec
previous post Researchers create a film applied to the roof capable of cooling environments without the need to use electricity, eliminating the need for air conditioning
next post Hochschild receives installation license for a gold mine project that will have an investment of R$ 900 million in Goiás