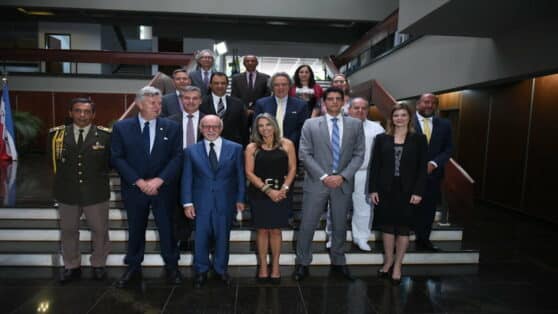 The construction of the waterway that will link Brazil to Uruguay will guarantee much more efficiency in cargo transport within the port sector and, consequently, an even greater expansion of the segment after the project is completed.

Recently, studies for the construction project of the waterway that will link Brazil to Uruguay were handed over to the Minister of Infrastructure. Until this Tuesday, (26/04), it is believed that the works project will have millionaire investments and will allow a much more efficient flow and transport of cargo. In addition to an even greater connection between the port sector of both countries, ensuring a faster development of the segment.

During this last Thursday, the Minister of Infrastructure, Marcelo Sampaio, received the project from the hands of the ambassador of Uruguay, Guilherme Valles, the studies for the concession project of the Lagoa Mirim Waterway, in Rio Grande do Sul, which will be a meeting point between the two countries and will enable an even greater connection of the ports in the region, with a greater efficiency in the logistics of operations with the loads produced both in Brazil and Uruguay.

This project is the first for waterway transport qualified in the Investment Partnerships Program and will ensure safe vessel traffic and cargo flow through the southern region of the South American continent. In this way, cargo transport will become much more dynamic and efficient, with less bureaucracy and much faster logistics for operations, since countries will be even more connected and will be able to carry out activities with more control over the flow of production carried out. in both nations.

With that, Minister Marcelo Sampaio commented on the need for the waterway connecting the countries and on the benefits for cargo transport with the construction of the project, also stating that “Brazil and Uruguay have a great history. They are more than sister countries. We share more than a thousand kilometers of border and maintain an expressive bilateral trade in the order of US$ 3 billion per year. We are united by historical, economic and cultural ties. What we want is to see this waterway operating and the border region, especially in southeastern Rio Grande do Sul and northeastern Uruguay, thriving”.

The Federal Government will still analyze studies for the feasibility of the project, but representatives of Brazilian ports expect good results for the construction of the waterway over the next few years.

Now, after delivering the final studies for the construction of the waterway that will link the countries, the Federal Government will analyze deeper understanding of the results, in addition to complementing them with the support of CAF (Development Bank of Latin America) and, at the end of the review of the studies, will open a public consultation to receive contributions from society, to finalize these initial stages with prior analysis by the Federal Court of Auditors (TCU).

Once that is done, the next steps will be the preparation and publication of the concession notice by the National Waterway Transport Agency (Antaq) and, finally, the scheduling of the auction. Meanwhile, the government just waits for the process and tries speed up the project, since the waterway will be essential for more efficient logistics in transporting cargo between Latin American ports.

In addition, the project is estimated at a total investment of R$ 30 million for construction and will allow Uruguayan vessels access to the port of Rio Grande (RS) through the waterway connection between Lagoa Mirim and Lagoa dos Patos.

Tags: constructionBrazil's waterwaysportsCharge transportUruguay
previous post After the granting of the IBAMA Operating License, PetroRio will start drilling new wells
next post Porto Ponta do Félix will export up to 120 thousand tons of wood pellets to European market ports