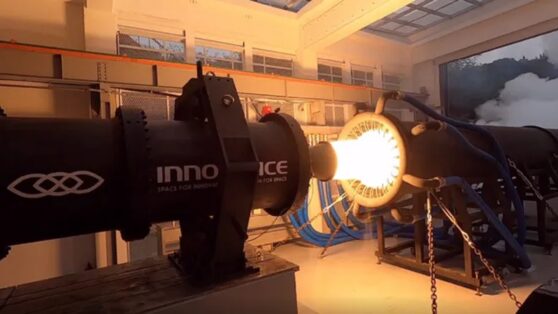 The HANBIT-TLV rocket during a test round at the startup's Geumsan facility in South Korea (Image: Reproduction/Innospace)

South Korean startup Innospace has announced its plans to launch its first rocket at the Alcântara Base. The company's rocket will feature technologies developed by the FAB.

South Korean aerospace startup Innospace plans to conduct its first suborbital launch in December 2022 from the launch center at Alcantara Base, located in Maranhão. The launch will serve as a test run for a single-stage rocket that is about 16.3 meters tall, which has been named HANBIT-TLV. The rocket will serve as a development platform for the startup's commercial satellite launcher, which is called the HANBIT-Nano. This launcher is designed to take a payload platform weighing up to 50 kg into a polar orbit, that is, one that crosses the planet's poles, at approximately 500 km altitude.

The startup's two rockets have a first stage with a hybrid engine of 15 tons, which is powered by paraffin and liquid oxygen. In addition, the upper stage of the rocket that will be launched at Alcantara Base It has a 3-ton hybrid engine. According to startup spokesperson Kim Jung-hee, if the launch is successful, the company will start preparing for testing with Hanbit-Nano.

The test rocket launched at the Alcântara Base will carry an inertial navigation system (SISNAV) developed by the Department of Aerospace Science and Technology (DCTA) of the Brazilian Air Force (FAB). The technology relies on a computer, rotation sensors to determine the position, speed and orientation of an object without an external reference and motion sensors.

However, according to the startup's spokesperson, the cargo will not be released into space. Jung-hee also stated that the country made the Alcântara Base Launch Center available for the startup to carry out its flights from there. In exchange, the Brazilian Air Force will send its payload. It is worth mentioning that, in May, the South Korean startup announced its plans to carry out up to 20 launches from Brazil.

Alcântara base will receive improvements in its space activities

A proposal filed this week, at the General Secretariat of the Board (SGM) of the Chamber of Deputies, aims to generate advances in Brazilian space activities, and will mainly include the Alcântara Launch Center (CLA).

THE General Law on Space Activities will be instituted through PL 1006/2022, authored by deputy Pedro Lucas Fernandes. According to the deputy, the purpose of the proposal is to establish norms with international standards to develop the sector, considering that, with general norms, there is the possibility of guaranteeing more legal certainty for the sector and, thus, making it more attractive to private sector investments.

According to the parliamentarian, there are infra-legal norms that govern space activities, that is, that were developed by the executive branch, but were not debated in the National Congress.

Innospace is a space company that develops and provides launch services for small satellite launchers with hybrid rocket technologies. These technologies, which are independently developed, enable cost innovation and reduce launch latency.

The company develops the best technology with the best experts to provide the ideal launch service that quickly transports small satellites into orbit.

Innospace aims to make future innovations in the launch market with fast, low-cost launch technologies. In addition, the company plans to develop its own state-of-the-art space mobility platform, which will be able to contribute to the development of a new outer space for a sustainable world.