Solar-powered plane covered by more than 17,000 solar panels can stay in the air for months without refueling 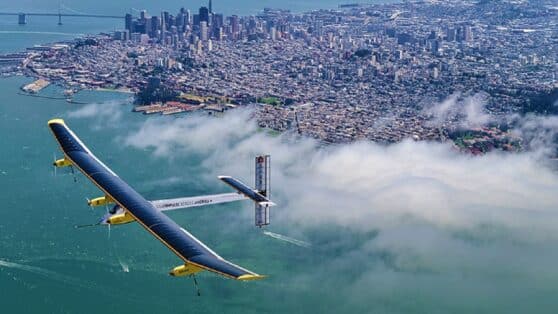 The solar-powered plane Solar Impulse 2, capable of flying over for months, has batteries that can survive for up to 10,000 cycles and withstand temperatures above 50°C.

Solar Impulse 2, a battery-powered, solar-charged aircraft, ended its world tour on July 26, 2016, returning to Abu Dhabi after more than a year and 40,000 km (25,000 miles) after its departure. With seventeen individual flights and accumulating almost 600 hours in the air, the solar powered plane broke nineteen world records on its historic journey. Along the way, its solar panels provided more than 11 megawatt-hours (MWh) of electricity, which powered four 13 kW engines during the day and stored the excess for night flights.

Airplane batteries can survive up to 10,000 cycles

The plane's world tour had one complication: the potential overheating of its 154 kWh Kokam battery bank during the 118-hour trip from Japan to Hawaii. The batteries feature Kokam's patented Ultra High Power NMC (Nickel Manganese Cobalt) technology, a variation of lithium-ion chemistry. These batteries can survive up to 10,000 charge cycles, have a low internal resistance, and dissipate 60% heat better than standard NMC batteries.

Their combination of energy density and power density makes Ultra High Power NMC batteries ideal for electric vehicles. On its flight to Japan, Solar Impulse 2 encountered difficult weather, so the ground crew decided to conduct an unscheduled test flight before the trans-Pacific crossing. All went well and the solar-powered plane was quickly cleared for takeoff.

However, they did not allow the batteries to cool down after the test flight. This, combined with the tropical climate and the extra-long flight to Honolulu, caused the battery temperature to approach 50°C during the flight, exceeding the specified limits for the batteries. The team decided to be cautious and postpone the remainder of the trip while engineers determined the cause and created a solution.

Upon landing in Honolulu, technicians removed the batteries and sent them back to their assembly plant in Germany, where they underwent extensive testing and where new batteries were installed for the remainder of the trip.

As you can see, the original batteries were not damaged by the heat and the engineers determined that Solar Impulse 2 would be safe to fly without replacing the batteries. However, it is better to be safe than sorry.

The delay proved to be worthwhile from a design standpoint. While the plane was grounded, engineers tweaked the cooling system by adding a pilot-controlled vent (shown in the image above), which allows outside air to cool the batteries when needed. Ventilation can be closed in colder temperatures to prevent batteries from freezing.

While an all-solar-powered airplane is impractical, hybrid and all-electric powertrains—solar-powered or not—can reduce the carbon footprint of mid-to-small aircraft.

The research and development that the Solar Impulse team conducted and the lessons they learned will provide impetus to the aviation and automotive industries as they reach new heights in energy efficiency and electric propulsion.