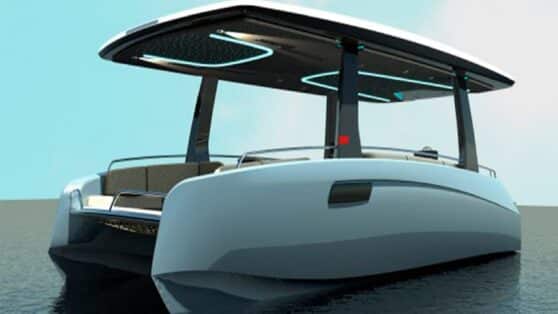 Company presents a solution for electrifying the nautical sector and plans to start local manufacturing in the second half of 2022 – image: Solar Boat Brasil/Disclosure

Solar Boat Brasil is developing a solar-powered boat in Camaçari, Bahia, with a range of 80 km and capable of reaching a maximum speed of up to 15 km/h.

With the objective of making vessels powered by photovoltaic solar light available in the national market, the company Solar Boat Brazil announced this Monday (25) that it is planning to start manufacturing a solar-powered boat in Camaçari, Bahia, in the second half of this year. The company was founded by Thomas Schulthess, an expert in creating large-scale wind and photovoltaic projects, in late 2020.

The company executive stated that the boat technology powered by solar energy has become popular in other parts of the world and that the potential of solar energy generation in Brazil motivated the development of the project in Bahia.

Schulthess details that Solar Boat Brasil has already completed two pilot catamarans, one measuring 10 meters for nautical tourism, and another measuring 7 meters for collecting floating plastic waste. The executive also highlights that the company will launch the series production of a 9.5-meter solar-powered boat at Cimatec Park, in Bahia.

At first, the production of 10 boats per year will be sold directly to the tour operator or public transport. The company has already started to discuss with the city of Bahia for the transfer between islands.

Solar Boat Brasil boats use photovoltaic solar panels which were produced in China and weigh about 70% less than ordinary solar panels. The equipment is designed to withstand the sea air and salinity, in addition to making it viable to generate energy on cloudy days.

According to Schulthess, the great advantage of a solar powered boat is its operating cost, which is 85% lower than a common vehicle, and this difference is due to the non-use of diesel as fuel and the maintenance of the combustion engine.

According to the executive of Solar Boat Brasil, the company's vessel is capable of reaching a maximum speed of 15 km/h and has a battery that can ensure a range of 80 kilometers. However, the real difference is trying to navigate as much as possible with only solar generation, without the need to recharge.

A solar-powered boat project, developed by students from the Federal University of Espírito Santo (Ufes), is participating for the fourth time in Desafio Solar Brasil, a Brazilian championship that took place in Rio de Janeiro between March 12th and 23rd. .

In 2018, the project achieved first place in the competition. In total, around 70 people are involved in the development of the project, which makes up the university's Technological Center extension program.