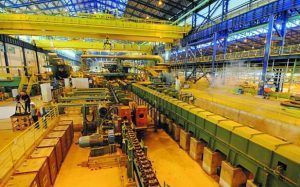 In an official statement, Usiminas said that it will resume the steel industry in Ipatinga and Alto do Jequitinhonha. More than 1000 vacancies.

[supsystic-social-sharing id='1′]After experiencing great difficulties, the Usiminas begins to have its prelude to a positive turn. The company realized that the time to generate jobs has returned and should hire around a thousand workers for projects in Ipatinga, in Vale do Aço and in Serra Azul, in Alto do Jequitinhonha. It is also targeting the international market.

In the Ipatinga region, 520 jobs will be opened, 500 temporary and the rest for machinery operation after the works are completed, all of this is scheduled for April 2018.

Another undertaking that was recently resumed was the Usimnas double mining plant in Serra Azul. The focus will be to maximize the company's mineral extraction in more than 24% and export to the international market.

The company has been gaining momentum in the national steel industry, step by step, but this recovery is for the medium and long term, with the best moment in the sector being in 2013.

“We will only consume the same volume again in 2028”, highlighted the president of Usiminas, Sérgio Leite, during the presentation of the company's figures to parliamentarians at the Legislative Assembly of Minas Gerais (ALMG), yesterday.

According to the businessman, there was a decline of 30% in steel ore transactions in the period from 2014 to 2016, and this year the indicators show an increase of 5%.

In addition to this crisis affecting the sector, shareholders are in a real “give-and-go” to decide that they will take over Usiminas once and for all. The protagonists of this fight are Ternium Technint and Nippon Steel. Seriously Leite did not want to commit and said: “I have a good relationship with both sides”. Source: Nowadays