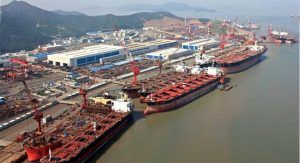 The country intends to enter the top 8 shipbuilders in the naval sector in the world, generating manpower and heating up the economy

The bankruptcy of Hanjin left the sector in shock and has led to a series of measures by the South Korean Government to ensure that the scenario is not repeated with other companies in the country. This time, a plan was announced that aims to order 200 ships over the next three years, which aims to revitalize the shipping industry but also shipbuilding. The mega-order is part of South Korea's restructuring plan for its shipping and shipbuilding industries, led by the Minister of Oceans and Fisheries. It will consist of 140 bulk carriers and 60 container ships – between mega-ships with 20,000 and 14,000 TEUs.

“After the bankruptcy of Hanjin Shipping, the sales of the South Korean shipping industry suffered a 10 trillion won drop, and the tonnage of deep sea container ships was halved,” admits the South Korean Minister of Oceans. Korean leader Kim Young-choon, adding, “We have prepared a comprehensive set of measures to support the shipping and shipbuilding industries, which face a protracted recession, intense competition and environmental regulations.”

New units will make the HMM scale in the table

It should be noted that the largest South Korean container shipping company, Hyundai Merchant Marine Co. (HMM), currently has a fleet with a capacity of 340,000 TEUs (owned and chartered), being the 12th largest operator in the world (already counting on ONE as the sole operator). The Minister of the Oceans admits that deliveries of container ships to HMM will all be made by 2020, bringing the company's capacity to around 1 million TEU, which will place it in the top-8 worldwide.

The South Korean shipbuilding industry has also faced recent losses and the local government intends to reverse the situation. In addition to these orders, the Minister for the Oceans is planning a series of mergers and partnerships between smaller shipyards in order to increase their competitiveness. It is also, on the other hand, looking for a new 'owner' for Daewoo Shipbuilding & Marine Engineering Co., which has recorded heavy losses in recent times.

Tags:
previous post Russians take over Petrobras factory and will resume work in 60 days
next post Architecture and urbanism firm hires for works in Rio