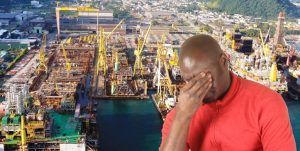 The president of Sinaval Sergio Bacci says that the situation of the shipyards is more serious than imagined and the number of jobs could reach ZERO by 2019, understand and watch the video

It has been a tradition at Sinaval since 2002, when the president Lula applied his first electoral program at the Angra dos Reis shipyard, where he committed himself to the resumption of the Brazilian naval industry. From that moment, Sinaval understood that it would be important to dialogue in all presidential elections with the candidates, in order to show the importance of the industry and what it represents for the generation of jobs and income. This year, the institution is preparing a document for all candidates in 2018, to show what was done from 2000 to 2014 (594 vessels were built) and what happened from 2014 to 2016. Sergio Bacci says that the problem was not the wrong done, because he punished himself, the problem was “breaking the company”. He is intent on showing what can happen in this industry going forward.

Shipyards will only be competitive in 10 years

Brazil needs to be competitive again, for this the country's shipyards need a demand for stable construction of vessels so that it is viable to compete in the international market and offer better prices to the demanders, naturally this can only be achieved with learning, investing in technology and of work.

Petrobras is essential for this sector

Petrobras plays an important role in this sector simply because it is the main demander of naval services in the country. It's no use thinking that Shell or Exxon will build in Brazil, because there is a lot of cheap labor in the outside world and with the same construction parameters, this role is in charge of Petrobras, mainly because it is a state-owned company. The lack of viable investment funds is also a factor that has been hindering leverage, such as the Merchant Marine Fund and the Guarantee Fund, which for bureaucratic and tax reasons are not being viable at the moment, despite SETE Brasil making progress in negotiations with Petrobras using one of these modalities.

Current status of shipyards and prospects

Over the past 60 years, this industry has had some very happy times. From the 2000s onwards, construction of maritime support vessels also began, generating about 82 thousand direct jobs and 320 thousand indirect jobs in the naval sector at the end of 2014, in short, the industry was in full swing. From today to “today”, about 52 thousand jobs were lost, and if nothing happens in the next few months or until the end of 2019, we will have a number very close to zero. People, institutions and unions (yes it's true) are working so that this doesn't happen and that the works are resumed as soon as possible. Watch the video here.