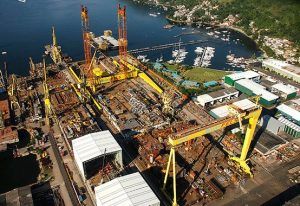 The EBR shipyard in the city of São José do Norte (RS) may be the first to start the recovery cycle of the country's naval industry, as it has been carrying out intense negotiations and, according to the company, everything is favorable and promising. This week, the board of Estaleiro do Brasil (EBR) met with José Ivo Sartori, the current governor of Rio Grande do Sul, to emphasize that the manufacturing contracts for modules for MODEC's offshore units will be under its responsibility, taking into account the current contracts with Petrobras.

The main reason for the meeting was to resolve state tax issues and a possible update of the same, in this way it would be possible to align with the new guidelines of Repetro (Customs Regime for the Export and Import of Goods For the Exploration and Production of Oil and Natural Gas ). It was also informed at this meeting that the State Department of Finance is designing a new project for evaluation by the legislature during the week.

According to Sartori, no deputy should place impediments to the approval of these new measures, since the state's collection would now have an ICMS of 3% from shipyards and the naval industry, a tax that was not previously collected by the state in this type of services.

2,000 direct job opportunities will be opened in São José do Norte in 2018, according to the EBR management during the meeting with the governor. Remembering that the city has been suffering from a strong recession, since a good part of its revenue comes from active shipyards. The QGI Consortium and the Rio Grande Shipyard will also be affected by these new measures.

Before closing the first quarter of this year, EBR managed to finish the assembly of the P-74 platform ahead of schedule at its shipyard in the city, which was delivered in April to Petrobras.