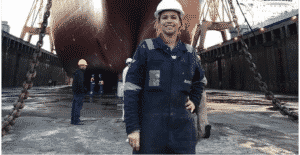 Being a woman, especially in the maritime oil and gas environment, has its challenges, but what Daisy had to face to get to this position will surprise you.

Daisy Lima da Silva, 37, has never had family members working on vessels, but she was interested in the competition at the Merchant Marine Officers' Training School, which trains bachelors in nautical sciences – the degree required for anyone who wants to climb positions in the nautical hierarchy. Today, she is the captain of a cargo ship, leading a crew of 19 men.

“When I started, there was still suspicion about our ability to get the job done. We had to work harder than our male colleagues to show our value”, says she, who, three years ago, became the sole commander of Aliança Navegação e Logística. Daisy graduated in 2003, in the school's third female class. Three years earlier, Hildelene Lobato Bahia, the first commander of the Brazilian Merchant Navy, left the same institution.

“Although it was encouraged from the beginning by commanders and co-workers, there were small jokes regarding the fragility of women”, she says. 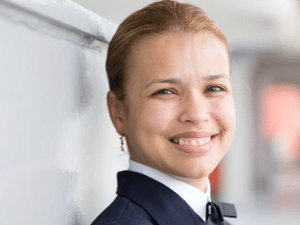 When called to be the mate (the position below the captain) of a ship specialized in large loads, which require care in loading and unloading, Daisy felt the stigma of the “weaker sex”.

“We would carry a load of 340 tons. As soon as I arrived, the commander looked me up and down,” he says.

But it was on this ship that she became commander. “I don't need to be Wonder Woman or the Hulk to play my role, I need to reason with my team about the best strategies for loading cargo on the ship, lashing, transporting and unloading. We have machinery that does the physical effort.”

When she started working in the area, the commander heard from her more experienced friends that they masculinized themselves during work, in order to speak the same language as their subordinates. But she decided to do it differently. “I kept my language, which was always serious. I speak louder when I need to, but I've never acted in a masculine way,” he says.

The emotional part is a challenge for everyone who stays on board for 56 days, as is the case with Daisy. “With us, you don't have to get bored at work, come home and cool your head. We have to solve our problems there,” he says. Universal Source

Tags:
previous post Climbers with CREA are called up for offshore and onshore work
next post Refinery guarantees millionaire investment from Petrobras and many job vacancies were opened in the city