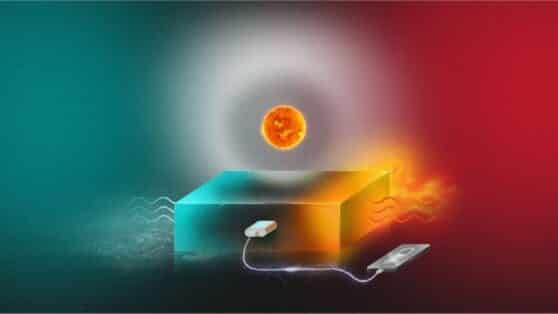 The solar energy is stored chemically, being released later with a catalyst. [Image: Daniel Spacek/Chalmers University of Technology]

The researchers behind a power system that lets you capture solar energy, store it for up to 18 years and release it when and where it's needed, have taken the system a step further.

A group of researchers from Swedish University of Technology Chalmers has been working on developing solutions to the solar energy storage problem for about 10 years. During this period, the researchers managed to develop a liquid that, when exposed to light, is able to change its molecular structure, causing it to remain in that state for years. In this way, it is possible to energy storage at any time, through reactions considered simple, something that makes the development very promising, serving to supply a range of devices.

According to the researchers, the energy storage fluid Solar Thermal Molecular – or “MOST” – is based on a type of combination of carbon, nitrogen and hydrogen. So, when the liquid is illuminated by some energy source, its molecular composition is soon changed, transforming, then, into an isomer.

In this way, the liquid can store the solar energy without needing to make any changes to its composition. The molecular structure can be stored for about 18 years, according to research. To recover the liquid, it is necessary to use a catalyst. The stored solar energy that is released, comes out in the form of heat, feeding a thermoelectric generator, generating electrical energy.

The researchers created a pilot plant, where it is possible to obtain around 1.3 W of energy, through 1 m³ of liquid. For commercial use, unfortunately, this storage of solar energy is still not enough, but some future work may be developed according to the evolution of the processes of accumulation and transformation of energy.

According to Emre Gencer, the study's author, the energy transition sustainable technologies such as solar and wind energy need batteries that have different life spans, but that can work even when there is no sun or wind. And for this, the manganese zinc battery is an excellent option, in addition to being cheap and of very good quality for these sources, thus being able to store energy for one or more days.

In the flow system, the two electrolytes with negative ions and positive ions are pumped in certain tanks until, when passing through a membrane, they can meet. A comparison was carried out to prove that the research, in fact, is viable, where they used other cell phones with zinc manganese batteries. All analyzes were performed in periods of approximately 8 h, 1 day and 3 days in duration.

With intervals of more than a day, the battery exceeded the energy retention capacity when compared to common lithium-ion or vanadium redox flux cells. In addition, the battery maintained its efficiency and low cost, even taking into account all that was spent on pumping the manganese slurry from the tank where it stores the energy.

Researchers at the Swedish University continue to advance in various energy storage technologies. Last year, a new type of battery was developed, promising to be innovative for the storage system of energy from renewable sources, such as solar energy and wind energy.

A semi-solid flow cell uses a mixture, in which dispersed particles of manganese dioxide are aggregated, along with an additive called “black smoke”, which is capable of conducting electricity.