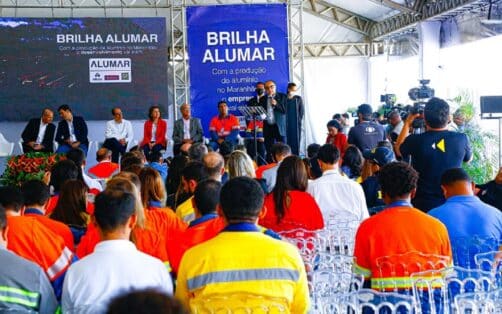 Alumar reactivated its aluminum production plant called Reduction, in Maranhão, generating thousands of jobs and income for the people of Maranhão. The unit will have a capacity of 447 thousand tons per year.

The Chief Secretary of the Civil House, Sebastião Madeira, participated this Thursday (28), in São Luís do Maranhão, in the ceremony for the reactivation of the Alumar aluminum production plant, representing Governor Carlos Brandão. The event also brought together federal, municipal and state government authorities, as well as top executives from the private sector. The factory, which is also called Reduction, was in progress to resume its entire production capacity and hired more than 1,000 direct employees, in addition to having generated 1,500 jobs, which were distributed mainly to neighboring communities and Alumar's partnerships with entities.

Alumar invests R$ 957 and generates thousands of jobs in Maranhão

According to Sebastião Madeira, Chief Secretary of State for the Civil House, the reactivation of the Alumar factory is very important, and the governor entrusted him to thank the aluminum producer and the Alcoa in Maranhão, because they are jobs, taxes and income distributed in the state, in addition to transmitting to Brazil the image of dynamism of the State and that Maranhão is a great place for new investments.

Madeira also highlights that almost every day new investments arrive in the state, stating that the maranhão It is a land of great opportunities. This significant impact on the generation of jobs and income in the state is the result of investments of R$ 957 million in the factory, which is also part of the strategy of Alumar and its consortium members to expand production, seeking new opportunities in the world market.

The Alumar aluminum factory, which generated thousands of jobs, comprises 03 Production Lines and an operational complex with 710 vats. The manufacturing estimate is large and represents a volume of 447 thousand metric tons of aluminum annually.

In the first phase, the factory should produce 828 tons of aluminum, with the energization of 68 vats, which is equivalent to 34% of the operating capacity of the 204 vats that make up Line 01. The total capacity should come into operation by March next year , using the most up-to-date cutting-edge technologies and within the appropriate standards worldwide for new environmental policies, with totally sustainable energy.

According to the president of Alcoa Brazil, Otavio Carvalheira, the resumption of aluminum production in Maranhão, with clean energy, puts the Alumar unit in a position ahead of its competitors, not only in the Brazilian market but also in the international market.

According to Helder Teixeira, the director of Alumar, the factory is operated by 93% of labor from Maranhão, so almost all employees are local, perfected and trained to work in the industry. Another positive aspect of the unit's return on operations is the social investments.

According to Teixeira, over the years, the company has been recognized as a citizen company. For the company, social responsibility is above all and proof of this is that Alumar is a partner of several institutions.

During the selection process for jobs at the factory, the company developed some programs to encourage the training of women. According to Walmer Rocha, operations manager at the Smelter, 50 women were hired and received training so that they could work at the factory.

According to Walmer, the company's current workforce has 20% of women and the company knows that in the industrial sector, these numbers are still modest and that's why it seeks partnerships to expand these numbers.

Tags: alumarfactoryjob creationMA - MaranhãoJobs
previous post The bill aims to make changes to the legal framework for mini-generation of solar energy and ensure more tax benefits for production
next post Volkswagen and BP partner to install 8,000 charging points for electric cars by 2024