Record exports of Brazilian ore in 2022 to China, Canada and Finland: Nickel sulphide is fundamental in the manufacture of batteries for electric vehicles, mainly in the European market

per Paulo Nogueira
-
–
in Mining 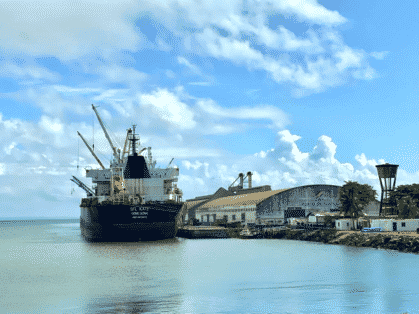 Loading of nickel sulphide concentrate at the Port of Ilhéus (BA), on April 4 -Source Atlantic Nickel

Salvador, April 14, 2022 – Atlantic Nickel, the only producer of nickel sulphide in Brazil, completed the third shipment of ore for export in 2022. The cargo with 10,185.8 tons of nickel sulphide concentrate set sail from the Port of Ilhéus (BA), on the day April 4, heading to Finland, on the European continent. With this shipment, the Santa Rita Mine, in the Bahian municipality of Itagibá, achieves a result of more than 29 thousand tons sold this year. The first two shipments of 2022 were destined for Canada and China.

Nickel sulphide concentrate is a high quality raw material and a fundamental component in the manufacture of batteries for electric vehicles. On a global scale and in increasing demand, it is one of the most versatile and resistant metals in nature, with crucial utility for building sustainable societies, through the generation of clean energy, capable of guaranteeing a low carbon future.

Since starting operations at Mina Santa Rita, in October 2019, Atlantic Nickel has been committed to working in the name of sustainable development, without losing sight of the purpose of reaching its maximum production potential. In 2021, the company ended the year with record operational and financial performance, after 11 shipments and 110,409.75 tons exported.

“Observing what we have already achieved gives us even more energy to walk the path of new achievements that lie ahead. As we celebrate our growing results, we are confident that we are also fulfilling our overriding commitment to sustainability. We operate an efficient production model, which does not lose sight of the purpose of promoting the socioeconomic development of Itagibá and the region”, concludes the general director of operations, Ricardo Campos.

The only nickel sulphide producer in the country, Atlantic Nickel has been operating since October 2019 in the extraction of the essential ore for the manufacture of electric vehicle batteries. There are more than 2,500 direct jobs generated by the business and R$ 151 million injected into purchases and contracts with suppliers in Bahia from 2018 to 2020.

The company's projection is to double production capacity, with the start of underground operations at the Santa Rita Mine, scheduled for 2028, which will increase the mine's lifespan from eight to 34 years (7 years of open pit mine + 27 years underground mine). According to the Preliminary Economic Assessment, around US$ 355 million is expected to be invested in the first five years of this new phase.

In addition, Atlantic Nickel is already celebrating the recent discovery of a new deposit with significant potential for nickel resources just 26km away, and in the same geological belt, where the Santa Rita Mine already operates.

Tags: Atlantic NickelBA - BahiaMining
previous post Candidates without experience are summoned in Rio de Janeiro, Itajaí and Recife for vacancies in the logistics company that invests the most in cabotage in Brazil
next post Company develops the world's most powerful electric car, vehicle goes from 0 to 100 km/h in 2 seconds