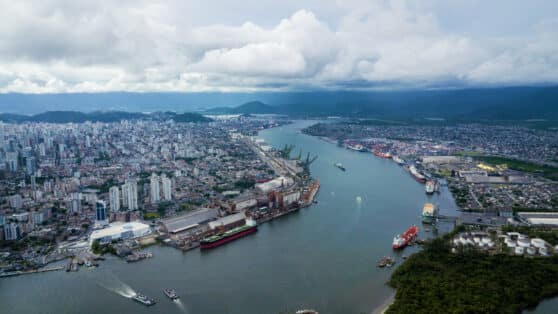 The Ministry of Infrastructure commented on the upcoming infrastructure works that the Port of Santos will receive and highlighted that, with the investment, the complex will have more expansion in exports and a high reduction in operating costs

With the Port of Santos privatization project increasingly accelerated by the Ministry of Infrastructure, new debates about the benefits of the process are taking place. According to the comment made by the Minister on Friday (22/04), it is expected that the investment in infrastructure works, which is budgeted at R$ 8 billion, will bring new perspectives for exports in the complex and for operational.

Infrastructure works for the Port of Santos are budgeted at R$ 8 billion total for the construction of a tunnel, railway line and renovations in the terminals of the port complex

The Ministry of Infrastructure made some statements regarding the privatization process of the Port of Santos last Friday and highlighted that the main benefit of the private sector investment plan for infrastructure works at the site will be the expansion in the number of export operations. Thus, the complex will be able to reach new levels within the international market with a more adequate port structure for these services.

The minister paid a visit last Friday to the region where the tunnel between Santos and Guarujá and the internal railway lines of the port will be built and commented on these new perspectives for the port, in addition to having passed through the STS10 terminal, the railway lines of Outeirinhos region and for the extension and deepening works of the Tecon Santos Wharf. All these structures will undergo the main infrastructure works that are foreseen in the investment plan within the Port of Santos and will be essential for the expansion of these export operations.

Thus, within the investment plan in infrastructure works, which is budgeted at a total of R$ 8 billion, R$ 3.285 billion will be invested in STS10; R$ 3.5 billion in the construction of the submerged tunnel and another R$ 1.5 billion from Santos Brasil at Tecon Santos, while R$ 23 million were applied to the third railway line in Paquetá. In this way, most of the main structures of the Port of Santos for the export of cargo will be covered by the initial investments and, over the next few years with the privatization process, new works will take place.

In addition to the main structures visited by the Minister of Infrastructure, Marcelo Sampaio also navigated the access channel to the Port and passed through the area that will correspond to the STS10 and also through the place where a submerged tunnel will be built to connect the cities of Guarujá and Santos. The surveys were carried out for a broader view of how the process infrastructure works and investment in this initiative.

Thus, Marcelo Sampaio once again highlighted the need for this infrastructure plan for the expansion of export operations and for greater growth at the Port of Santos, stating that “These investments will ensure that we increase our competitiveness, efficiency, and thus reduce the cost-Brazil”, which concerns the expenses necessary for cargo handling operations, transactions and other logistical issues within the port production chain.

In operation since the end of 2021, Tecon Santos, operated by Santos Brasil, has a projected investment of R$ 1.5 billion by 2031 and will include infrastructure works to deepen the channel, being the main highlight of the expansion plan for the Port of Santos.

Tags: ExportinfrastructureConstructionPort of Santosports
previous post NTS announces two contracts signed for the transport of natural gas between Galp and Gasmig as a way to boost the national market
next post Greener announces that Brazil is close to reaching the mark of 45 GW of installed capacity in projects in the solar energy centralized generation market