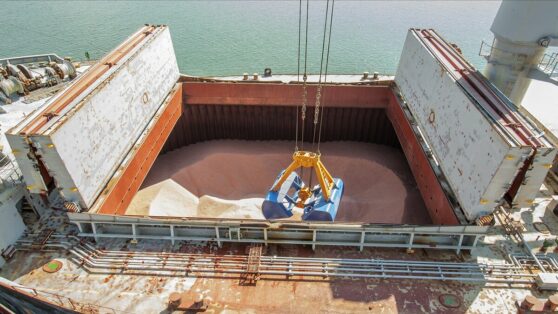 With the new logistics rules at the Ports of Paranaguá and Antonina, productivity in fertilizer import operations increased by almost 30% and ships are able to unload in a more organized and efficient manner

After a major problem in the disembarkation logistics of ships that are carrying out fertilizer import operations in the last week, the administration of the Ports of Paranaguá and Antonina changed the rules of these operations and, during the last Wednesday, (20/04) , commented that he managed to increase the productivity of this product flow by almost 30%, thus making the waiting time increasingly shorter for vessels.

The deficit in the international fertilizer market after the start of the war between Russia and Ukraine has greatly worsened the situation of imports of the product into the country. However, after a few weeks with major problems in disembarking the ships carrying cargo at the Ports of Paranaguá and Antonina, Portos do Paraná made changes to the logistics rules for this activity and managed to normalize the situation, increasingly expanding productivity in this activity. segment.

In this way, the logistics of operations became increasingly efficient this week and, with the changes in operating rules, the ports achieved an increase of almost 30% in productivity levels for each unloading of bulk imports. The current average, according to Portos do Paraná, is more than 40 thousand tons per day in ports, which represents a total of two ships fully loaded with bulk fertilizers for import.

In addition, this new logistics brought even better results for the total handled per month and, according to the company's projections, the ports will be able to rise from 800 thousand tons/month to more than one million tons. The changes in the operational rules for the import of fertilizers were also linked to a strong movement of employees from the ports and companies to make the waiting time for the unloading of ships, which was expected to be up to 60 days, decrease considerably to ensure more efficiency and speed within these operations in the complexes.

Although Brazil has a large number of ports capable of importing these fertilizers, the ports in the state of Paraná, Paranaguá and Antonina, are the main entry routes of that product. Thus, according to data from the Ministry of Economy (ComexStat), based on data from the 1st quarter of the year, about 31.5% of products imported by Brazil arrive through Paranaguá and Antonina, proving the relevance of the complexes for operations.

Thus, the president of Portos do Paraná, Luiz Fernando Garcia, commented on the need for even more investments in the operational logistics of unloading the ships and stated that “The Port of Paranaguá has one of the best average operational boards for the unloading of products among the Brazilian ports. To ensure greater efficiency in the fertilizer segment, the 'average board' ranges from 6,000 to 9,000 tons per day, per berth or ship” and highlighted the factors that influence productivity: “It depends on the destination of the product, the schedule; the conditions of withdrawal of the goods, loading to the Interior; among other factors, such as the rain as well”.

In this way, the company Portos do Paraná continues to invest in better operational logistics and, over the next few months, expects to make the unloading of fertilizers even greater, expanding the number of 40 thousand tons per day to attract even more ships with the product.

Tags: AntoninafertilizersImportshipsPort of Paranaguá
previous post Leading global vehicle manufacturer Toyota, boards Corolla flex-hybrid sedan, the first in the world to use flexfluel technology in an ethanol mission in India
next post 95 free courses certified by Fundação Bradesco in the areas of Administration, Accounting, Education, Technology and much more