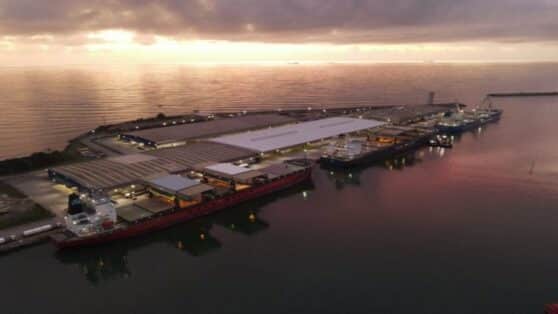 During the month of April, the management of Portocel, located in Aracruz (ES), carried out the initial tests of the new technology used in the terminal for maneuvers with ships in the draft. And, during last Friday, (29/04), the representatives commented that the tests were a success and these cargo handling operations at the port will benefit with even more efficiency and control of the entire process.

Located in Aracruz, in the state of Espírito Santo, Portocel announced the first tests of the new dynamic draft technology at the terminal for maneuvering operations with ships this April and, as a result, became one of the first ports in America Latina authorized to operate in this modality, after the great success in results from the initial tests, which showed much more efficiency in operations with this new technology.

Among the various new technology resources for the dynamic draft at the terminal, the highlight is ReDRAFT, which calculates in real time and with forecast the dynamic clearance below the keel, based on the characteristics of each vessel and the access channel, considering the environmental conditions at the time of the manoeuvre. In this way, the port is able to have an accurate calculation of the maximum and minimum draft to ensure even greater safety in operations of somewhat risky maneuvers with ships arriving at the complex.

All tests carried out during the month of April were monitored by the Portocel team, by representatives of the Captaincy of Ports, the main names of Companhia Docas do Espírito Santo (Codesa), a technical team from Pilotage of Espírito Santo and, finally, some representatives of Argonáutica, a company that operates the ReDRAFT technology. Thus, it was found that the dynamic draft technology is really very efficient, from the preparation activities, which preceded the maneuver, until the execution by the pilots, guaranteeing much more efficiency and control of this information throughout the operation.

After the first tests carried out at the port terminal, Codesa's management stated that this is the first step towards the implementation of dynamic draft technology in Espírito Santo and that, after Portocel was a pioneer in this new solution for maneuvering with ships, the state can join the project more easily. In addition, the technology will also bring more benefits to navigation safety, by allowing more accurate measurement through electronic sensors applied to a systematic of rules for ship manoeuvres.

Thus, Anderson da Silva Santos, Port Operations and Planning Manager at Portocel, commented on possible situations with ships that could benefit from the technology and stated that “In adverse conditions, in which there may be a risk of the vessel touching the bottom even with the application of the static draft rule, the tool presents data informing the maximum safe drafts for navigation, which may lead to a decision to reduce the draft so as not to postpone the maneuver, or to choose another window considered safe to exit the ship” .

Finally, the representatives state that the expectation is that there will also be a gain in flexibility in choosing safe windows for navigation with ships and that the terminal will be highlighted in this initiative.

Tags: shipsPortocelportstechnologyport terminal
previous post Sinduscon supports the Bill that aims to create a bank of construction materials for works aimed at needy families in Balneário Camboriú
next post NTS announces two contracts signed for the transport of natural gas between Galp and Gasmig as a way to boost the national market