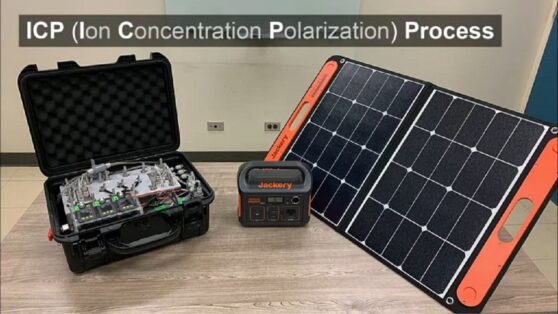 Scientists at MIT have developed a portable desalinator that uses solar energy to generate drinking water. The product is not yet on sale, but promises to generate 1 liter of water per hour.

MIT researchers have developed a portable desalinator that weighs less than 10 kilograms and fits in a briefcase, capable of removing particles and salts from seawater and delivering drinking water directly into a glass. The product requires less electricity to work than a cell phone charger, and can be powered by a battery or a small solar power panel portable. The desalinator generates drinking water that exceeds World Health Organization (WHO) quality standards.

Unlike other portable desalination units that need water purification filters, this device only uses solar energy to remove particles from the water.

Due to the elimination of the need for filters, long-term maintenance requirements are reduced considerably. And that could allow the unit to be installed in remote and under-resourced areas, such as communities on small islands, aboard ships or to contribute to refugees fleeing natural disasters.

According to the professor of MIT, Jongyoon Han, this is really the pinnacle of a journey that your group has been on for over 10 years. The professor explains that the team worked for years on the physics behind individual desalination processes, but putting all these advances in a “box”, building a system and demonstrating it in the ocean, this was a very meaningful and rewarding experience for everyone. .

Understand how the portable desalinator works

Portable desalination units available on the market use high pressure pumps to push water through filters which are very difficult to miniaturize without compromising the energy efficiency of the device. It is worth mentioning that these devices often clog, requiring replacement or maintenance.

Instead, MIT's new solar-powered portable desalinator is based on a technique known as polarization ion concentration. The equipment, instead of using filters, applies an electric field to membranes placed below and above a channel through which the water passes. Membranes expel negatively or positively charged particles, including salt molecules, viruses, and bacteria, as they pass.

The charged particles are sent to another stream of water, which is eventually discarded. The process done by the solar-powered portable desalinator removes suspended and dissolved solids, making it possible for clean water to pass through the canal. As it only uses a low-pressure pump for water to flow, the technology uses less energy than other techniques.

Despite being efficient, the polarization process does not always remove all the salts, so the researchers developed another process, called electrodialysis, so that the remaining salt ions are removed.

The team of scientists has miniaturized everything so that energy efficiency is improved, allowing solar power panels fit in a suitcase. Therefore, it is only necessary to extend a water hose to the salty sea and another to the glass and it will fill with clean, drinking water in about 30 minutes in the cheapest version of the desalinator.

The more expensive and slightly larger version is capable of producing up to a liter of water per hour. However, although it was already working, the team tested the portable desalinator with clean water only. Now, the researchers plan a battery of tests under real conditions, with water found alongside communities that need water desalination.