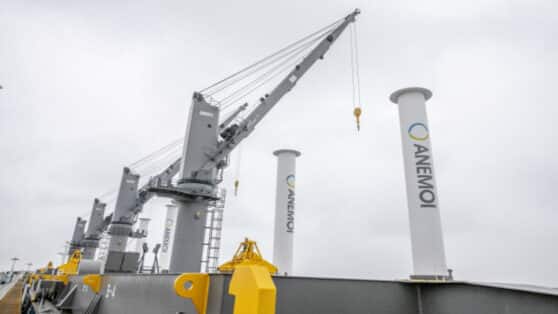 After arriving for the unloading of fertilizer loads, the MV Afros ship left on Tuesday, (05/03), for Argentina and should return to the Port of Paranaguá, in Paraná, later this month. The vessel is a pioneer in the use of rotating sails to create a technology that reduces fuel consumption. With this, the ship guarantees much more sustainability within its cargo handling operations in the complex.

With the arrival of a large number of vessels to unload tons of fertilizers at the Port of Paranaguá, the MV Afros vessel achieved great prominence at the location. This is due to technology innovative and pioneer in the use of rotating sails to use the help of the wind to move the vessel, thus ensuring a high reduction in fuel consumption and, consequently, more sustainability in operations.

The ship docked last Thursday (26) at the Port of Paranaguá, coming from the port of Klaipeda, in Lithuania, with 48,000 tons of potassium chloride. And, although it went to Argentina last Tuesday, the vessel is expected to return to Paraná later this month for the landing of new tons of fertilizers. This is the first ship to use the help of the wind through rotating sails in these operations, aiming at a reduction in fuel consumption in all its cargo unloading activities.

In addition, MV Afros also has innovative systems that prevent bulk spills, oil spills and work accidents, which ensures even more efficiency in cargo handling. Finally, another technology that guarantees more safety in operations is the frequent testing of the winch brakes that pull the mooring cables and a walkway so that workers do not take risks when following the final load from the hold. Thus, the ship not only achieves more productivity and efficiency in the unloading of fertilizers, but also a safe operation for everyone.

After the ship's arrival at the Port of Paranaguá and the great prominence that the vessel achieved, some teams from the company Portos do Paraná visited the vehicle. Thus, João Paulo Ribeiro Santana, Environment director of the public company, commented on the innovative technology and stated that “The Port of Paranaguá is a signatory of the UN Global Compact and is studying strategies to attract vessels that are aligned with these intentions, among them help to reduce the emission of greenhouse gases”.

With initial tests carried out in 2018 to reduce fuel consumption, the MV Afros achieved fuel savings that reached 12.5% in the first month. In addition, just at the beginning of operations, using 73 tons of fuel less, the vessel reduced the emission of 235 tons of carbon dioxide. This technology was developed in the UK and is now being rolled out around the world to reduce fuel consumption.

Finally, the company highlighted that this is the type of vessel that should be prioritized in cargo handling operations at the Port of Paranaguá, since environmental commitment and sustainability are essential points for the current international market.

Tags: fuelshipsPort of ParanaguátechnologyRotating candles
previous post Andritz to supply equipment for Nexa's sustainable mining project in Mato Grosso
next post Ação X is recruiting professionals from Macaé and Rio das Ostras (RJ) who work in the Offshore sector to participate in its selection processes