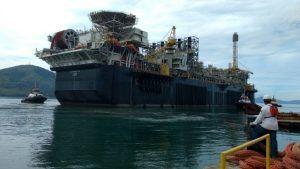 Petrobras requested operating license for the P-75. The P-74 platform left the @Estaleiro EBR (Estaleiros do Brasil Ltda) today. The two platforms will produce in the Búzios field:

Petrobras asked Ibama to release another platform for production in the Búzios field, in the transfer of rights area of the Santos Basin pre-salt. This time, the oil company applied for an operating license for the FPSO P-75, which will be part of module 2 of the field, which has three production units scheduled to start operating in 2018, a record for the same field.

The FPSO P-75, the second platform in Búzios, had its installation authorized by Ibama – in January of this year – until December 21, 2021 . The FPSO P-75 is being built at the Cosco Shipyard in China. The director of Production Development at Petrobras, Hugo Repsold, was recently in China visiting the project. The FPSO has the capacity to produce 180,000 barrels per day of oil and 6 million m3/day of natural gas.

On the 12th, Petrobras requested an operating license from Ibama to start production on the FPSO P-74, which will produce in the first module of the Búzios field, in the transfer of rights area of the Santos Basin. This should be the first assignment of rights project to go into production in the country.

The P-74 is the first definitive platform of the assignment to receive an installation license and should be the first to go into production in the area. The unit, which is being integrated into the EBR Shipyard, will have the capacity to produce 150,000 barrels per day of oil and compress 6 million m3/day of natural gas.

How big is the Búzios field?

The Búzios field was declared commercial by Petrobras in December 2013 and has 3.058 billion barrels of recoverable oil, a volume similar to what was discovered by the Petrobras, Shell, Total, CNPC and CNOOC consortium in the Mero field, the first sharing area of the country production. Petrobras' current business plan provides for the start of production on five production platforms in Búzios by 2021, three of which in 2018 alone: P-74, P-75 and P-76. Next year, the FPSO P-77, the last of Petrobras' own series, should start operating.

In addition, Petrobras is currently bidding for the charter of the fifth platform for the Búzios field, which will have the capacity to produce 180 million barrels per day and compress 6 million m3/day of natural gas. The company receives proposals for the project in March.

What is an onerous assignment?

The Union granted Petrobras the right to exercise, through direct contracting, exploration and production activities in pre-salt areas that are not under the concession model, limited to a maximum volume of 5 billion barrels of oil and natural gas . The contract is valid for 40 years, renewable for another five years. The criteria to define the value of the production rights of the transfer of rights were established through negotiations between the Federal Government and Petrobras, based on technical reports issued by independent certifying entities and by the government in 2010. This contract is now under review. Source and authorial text by E&P Brasil