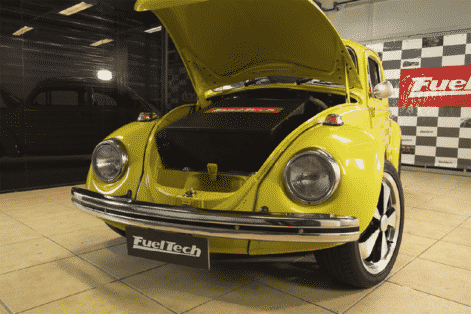 The VW Beetle converted by gauchos could be another electric and economical car alternative for drivers in Brazil and around the world.

In recent times, after the creation of numerous protocols and agreements to reduce carbon dioxide emission (CO2), in addition to the absurdly high prices of fossil fuels, it has become a good alternative to have an electric car or any other electrified vehicle at home. When talking about converting a classic combustion car from Brazilian streets to an electrified one, like the VW Beetle model – a traditional Volkswagen car – using a nationally produced engine, the scenario ends up looking even more tempting. Therefore, researchers from the Fueltech company, located in Rio Grande do Sul AND WEG, converted a 1977 VW Beetle into a 100% electric car, capable of reaching about 140 km/h.

Fueltech, in 2019, closed a technology development partnership with WEG, to carry out the conversion of vehicles. In mid-2020, even with the pandemic, the partners received the VW Beetle, but it already had the project of another startup to be converted into an electric beetle.

When the Beetle arrived, researchers from Fueltech and WEG were able to take a closer look and better decide on the conversion. Lasting approximately 1 year, the beetle was “ready” in July 2021.

The “done” is precisely because part of the electric beetle project continues to be developed and perfected. The battery that was used to power the VW Beetle's electric motor had to be divided into two parts, with around two-thirds of it being under the hood, at the front of the Beetle. The rest is behind the rear seat, next to the engine.

The so-called slow full recharge in alternating current (AC), takes approximately 9 hours, but allows the car to have a range of 150 km. However, researchers at Fueltech reported that there is a possibility of reducing this recharge time by half.

According to Fabiano Isoton, research and development manager at Fueltech, a fast charging system has not yet been implemented in the electric Beetle, but it will be possible to reduce this charging time by half.

Isoton also said that it is a matter of time before they carry out some component changes, but that they have not yet reached that stage, as they are still in the development phase.

According to Isoton, the creators of the project that the transmission of the electric Beetle would remain manual, something unusual for the lineage of electric cars. However, the operation is a little different than usual, due to the turns of the electric motor, which are much faster than a combustion engine.

Therefore, the driver will not need to change gears all the time, having to do so only at some point on a steep climb, or something similar.

The VW Beetle Electric (originally, VW Beetle 1977) was also provided with a digital on-board computer, which is located right on the central panel, where the driver can check information about the beetle’s charge level, battery life, speed, odometer, among other information.

The researchers calculated that the cost for each km driven with the electric beetle is R$ 0.17. This means that, when “filling the tank” of the electric Beetle, the driver will spend approximately R$ 25.50, absurdly incomparable to literally filling the gas tank of any automobile, nowadays. The battery used by the electric motor is 25 kWh, with a voltage of 130 Volts.