Petrobras says 4 more platforms will be operational by October 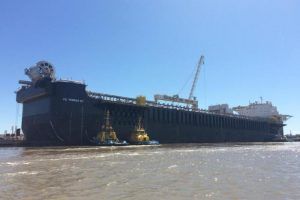 Another 4 platforms will be operating until October of this year, says Petrobras. The state-owned company is now in the recovery phase.

In the recovery phase due to the delay of the projects in the last year to Petrobras plans to put four new platforms into operation and in full production (Petrobras platforms). The idea is to start producing them in the period between October and December of this year, according to Hugo Repsold (Executive Director of Production and Technology Development).

Work on the Cidade de Campos dos Goytacazes platform units, in the Tartaruga Verde field, in the Campos Basin, and on the P-74, in the Búzios field, in the Santos Basin, began in the first six months. The forecast is that now, in the second half of the year, operations will begin at the following units located in the Santos Basin: P-67 and P-69, in the Lula field, and P-75 and P-76, in the Búzios field. There is even one more that is scheduled to start in 2019, the P-68.

Hugo Repsold explains that the reason why the new units (platforms) were accumulated to start operations this year was a reflection of the delay in projects in 2018. Taking advantage of a good recovery phase, the director also commented ““I would say that today Petrobras is very synchronized with all the events and we are heading towards a sustained growth in production in the coming years”.

Without giving further details, Repsold commented that the state-owned company's idea is to have, and use, its own units from 2023. A matter of strategic decision, Petrobras will decide what is best for the company. Explaining a drop in production in the sixth month of this year, Repsol said that the event was punctual. Growth will occur with the release of new units and production will inevitably boost. In the third quarter of this year there will be a review of the company's business plan aimed precisely at the use of its own platforms, which will be published in due course, recalls Repsold.

Tags:
previous post Offshore vacancies in a multinational in Brazil announced – Applications until the 20th
next post São Gonçalo do Amarante with vacancies for 15 Occupational Safety Technicians