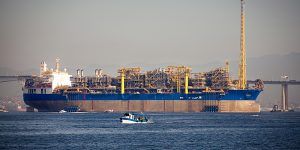 There were no injuries or damage to the environment, the state-owned company said.

A fire broke out on Tuesday (16) at the Petrobras Cidade de Maricá platform, in the Lula field, in the pre-salt layer of the Santos Basin, which made it necessary to stop production, the state oil company said in a statement. .

The emergency, according to the company, was contained at 4:55 am with the fire-fighting equipment on site. The production of the platform has been halted and will resume once safety tests are carried out.

"There was no damage to people and the environment," Petrobras said.