Petrobras devalued 8.5 billion this week: “Sell or break for good”, according to Pedro Parente 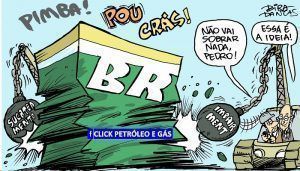 Pedro relative released a controversial statement this week about the crisis at Petrobras and the financial difficulties that the state-owned company faces.

The plot of this never-ending soap opera by Petrobras is starting to have irreversible effects on the economic health of the state-owned company, especially that of Brazil. As if that wasn't bad enough, the financial market ended up signaling to the world this week another 1 degree downgrade of the company in the order of 8.5 billion on Wednesday (14/03), making the country's economists worried. Soon after, Pedro Parente appeared in the press saying: "There is no choice, now we have to sell everything we can from our portfolio of assets so that Petrobras does not go bankrupt once and for all", exclaims the current president in a fervent and notoriously worried way.

Parente recalls that the Brazilian state-owned company closed the year 2016 still owing 100 billion but that from an operational point of view, it has been standing out a lot and has maximized its activities in the development and research of the pre-salt, which would be the “Golden El” for the company. resumption of the economy in the exploitation of fossil fuels.

Stagnated by the corruption scandals that do not seem to reach their final climax anytime soon due to the operations of Lava Jato, which every day more and more big fish involved in bribes are discovered, Brazil will still take a while to regain the trust of the investors.

Petrobras still holds the biggest debt of all the big global oil companies, then it is extremely important that there are divestments of economically non-viable assets to allow future investments. Although many people are against these initiatives, it is necessary to remember that it has been happening since Graça Foster was president of the state-owned company, which by the way is from the PT, so he does not see the reason for so much union opposition to these measures.

The TCU( Court Union accounts) temporarily put a brake on the sale of assets so that changes are made to this policy, demanding optimization of constitutional terms and that there be a public notice for the bids, which nowadays is being done through “word of mouth”, all a matter of publicity to which measures are already being taken to meet the demands of the TCU at this point.

Reinforcing that due to the delay in judicial deliberations, the proposed sale of  Petrobras Distribuidora (BR) is still in progress and powers interested in buying this and other projects are being chased away because of this endless “take it from here” by the TCU. If this bureaucratic policy is extended for another year, the company will be forced to change fuel prices again, reduce investments and adjust costs.

About works of COMPERJ, Parente says that most of the companies that were invited to carry out the works were foreigners, but that there are many Brazilian contractors also competing. The criterion taken into account for this bidding was due to the work being large, so it is necessary to consider the capacity of the companies that will be able to execute them, and ironically, most of them are foreigners, simple as that. Remembering that after the 2nd semester of 2017, the activities of this complex will begin.

In Houston, to which Pedro Parente was at an event with executives from oil industrya, he said that there are many investors interested in the pre-salt, including the shell, which already owns some blocks and wants to further increase its operational portfolios in our waters.

Now dear reader and follower, we are seeing the measures being taken so that our country returns to its maximum potential in the oil industry, but due to the crisis and judicial bureaucracies, this soap opera will have its plot sooner in the history of Brazilian dramatology.

Tags:
previous post 3 mistakes you make when applying for a job in the oil and gas sector in Brazil
next post MODEC Hospitality: Discovery of the service provider in 6 MODEC offshore units