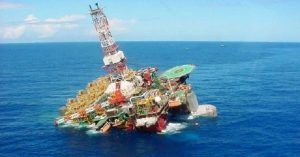 Accident that killed 11 people on a Petrobras offshore platform in 2007 puts in check 1.5 billion in the state's cash

Seventeen years after the tragedy on the P-36 platform, in the Roncador field, in the Campos Basin, Petrobras continues to fight in court against the punishments applied by Ibama and those demanded by the Federal Public Ministry (MPF), in disputes that reached R$ 1,469 billion. The accident completed 17 years ago yesterday and is one of the biggest ever recorded in the Brazilian oil industry. On March 15, 2001, the rupture of an emergency drainage tank damaged a series of components of the platform, causing a gas leak and a second explosion, of great intensity, which killed 11 fire brigade employees and led to the sinking. from the P-36, five days later.


“Despite the work carried out by the Petrobras teams, its deficiency in terms of equipment to combat oil spills on the high seas in mechanical form was evident. (…) With regard to the pollution caused, it is unequivocal, and we believe that the appropriate sanctions should be adopted, to the best of our knowledge”, states the Feema document, cited in Marcello Granado's vote. In the second half of 2017, the trial at TRF-2 was scheduled, but was removed from the agenda.

Causes of the incident

ANP report points out that an emergency drainage tank ruptured, causing the first explosion and the gas leak on the platform. The gas ignition caused the second explosion, killing the 11 brigade members and causing data that led to the flooding of facilities, tanks and lines and subsequent sinking. The agency identified errors in an operation to empty a drainage tank (port) which led to the passage of fluids that were supposed to return to the process plant, but were pumped to the other emergency tank (starboard), exceeding the limit pressure of the equipment and causing the explosion. Lines and other damaged parts led to subsequent events. Source E&P Brazil