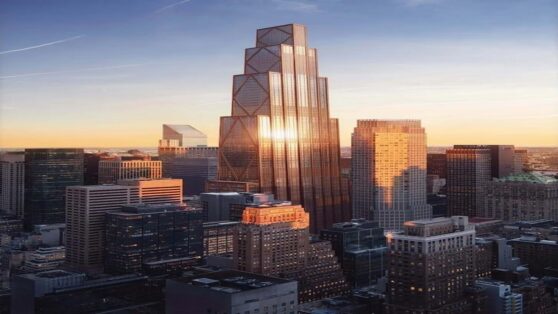 A fingerprint of the future Park Avenue skyscraper. / Foster+Partners

In addition to using clean energy, entering the new axis required by law, the gigantic American bank will generate a series of new jobs.

the great american bank JPMorgan Chase revealed on Monday (18), its plans for the new global headquarters, which consists of a 60-story skyscraper, fully powered by sources of clean and renewable energy. Some other features, such as energy-efficient design, feature triple-glazed windows and a water-reusing storage system, which can reduce usage by about 40%. The skyscraper will also use smart building technology, which uses sensors to monitor and reduce energy consumption.

Completion of JPMorgan Chase's 60-story skyscraper is scheduled for 2025. When completed, the 423-meter-tall building will become New York City's largest clean energy-powered 100% building, according to data provided by Foster + Partners , architecture and engineering office responsible for the project.

During the official press announcement, JPMorgan Chase and Foster + Partners reported that the skyscraper will achieve net zero emissions from operations, with a portion using energy from a hydroelectric from New York.

Works on the largest renewable enterprise are accelerated to meet targets

Construction on the skyscraper has already begun on the site where the 215-meter Union Carbide Building once stood. The architects reported that around 97% of the skyscraper's predecessor's building materials will be reused or recycled.

An all-new, unique design promises to take up more than twice as much ground-level outdoor space. But the building will be complete, with a public square and wide sidewalks. According to Norman Foster, founder and architect of Foster + Partners, he called the project a “new landmark that responds to its historic location.”

Throughout his talk about the skyscraper, Foster reported that the tower's design is unique and responds to the challenge of respecting both the rhythm and Park Avenue's distinctive urban passage. Foster also spoke about the infrastructure of the site, which will be able to accommodate the city's transportation, resulting in a solution he called "elegant" in terms of structure, enabling JPMorgan Chase to embrace a new vision, both now and in the future. future.

After the pandemic period, JPMorgan Chase is now focused on the future, to recover economically and also return to face-to-face work, so the new tower can house up to 14,000 employees in more than 700 million square meters of space.

The skyscraper project offers occupants a variety of facilities aligned with the well-being of all, including air filtration systems, a health and fitness center, indoor vegetation and motion sensor technology.

The tower is located at 270 Park Avenue and is part of one of the largest plans ever drawn up, which is the transformation of a 78-block stretch of New York's Midtown East. In the year 2017, local authorities voted to rezone the neighborhood, with De Blasio at the helm of NY at the time, who promised major upgrades to subway stations, as well as more pedestrian space, investments in its iconic landmarks, and yet another new generation. of on-site office buildings.

The opening is scheduled for 2025 and will already arrive with the standards required by the new law passed by former New York Mayor Bill de Blasio, which restricts the use of fossil fuels in all new residential and commercial buildings from 2023. new legislation charges new constructions that make buildings that use 100% of clean energy until the year 2027.

The bill was introduced last year, by New York State Senator Brian Kavanagh and Representative Emily Gallagher, who proposed reducing NY's carbon emissions by millions of tons, ensuring that low-income residents also have access to renewable energy. According to local authorities, it is estimated that about 70% of NY's greenhouse gas emissions come from large buildings.

Tags: Renewable energySolar energyJPMorgan Chase
previous post Porto do Açu announces venture with Cubo Itaú to focus on innovation and digitalization in the logistics of port operations
next post US scientists have developed solar panels that generate energy at night