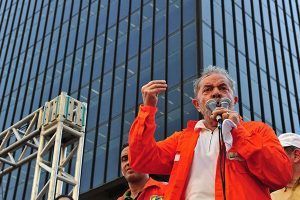 It has not yet been defined by the union whether the strike could interrupt operational activities in the Campos or Santos Basin.

The coordinator of the Single Federation of Oil Workers (FUP), José Maria Rangel, called yesterday (Thursday 5th), the oil category to hold assemblies on Friday, 06, in the morning, to deliberate on the possibility of a national strike. against the political imprisonment of former President Lula. “The gravity of the moment requires tough decisions. That is why we are advising all oil workers and union leaders to be tomorrow morning at the units holding assemblies to deliberate on a possible strike, in case the arrest of former President Lula is underway”, says the FUP coordinator.

“We cannot accept that the best president in the history of this country, the president who took Petrobras to a level never seen before in the history of this company, discovering the pre-salt layer, reactivating the naval industry, generating jobs, income and technology for the country, be arrested for inferences”, emphasizes José Maria Rangel, guiding workers who are off duty to look for the units closest to the Petrobras System and join the assemblies.

In an assembly held on the morning of this Friday (6), the oil workers of the Duque de Caixas Refinery (REDUC), in Rio de Janeiro, unanimously approved the indication of a national stoppage of the category in support of President Lula and in defense of democracy. and workers.

The direction of the FUP met in São Bernardo do Campo, and agreed with the other leaders of the union and social movements in the country to carry out a major general strike in defense of Lula and the Democratic State of Law. It is not known whether offshore operations spread across Brazil will be affected as a result of this strike.