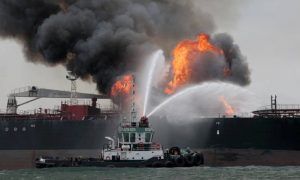 The accident with the oil tanker happened in the China Sea, most of the missing are Iranians. Rescue teams are currently on site.

[supsystic-social-sharing id='1′]tanker ship they are real bombs floating in the sea, literally speaking. The occupational hazards for those engaged in offshore activities are incalculable due to the nature of the work. Unusually, accidents have occurred in a worrying number, according to world authorities. Yesterday (07) a ship ended up colliding with another in the China Sea, watch the video below and the full report from the Petronotícias website below:

“Serious accident in the China Sea. A ship loaded with Iranian oil, operated by the country's main oil transport company, caught flames and spilled some of the cargo on Sunday after colliding with a Chinese bulk carrier, leaving all 32 crew members missing. Thick clouds of dark smoke could be seen coming out of the Sanchi tanker.

Rescue efforts were hampered by bad weather and the fire on the ship. The Sanchi collided with the CF Crystal about 160 nautical miles off the coast near Shanghai on Saturday night, China's Transport Ministry said in a statement. The tanker, registered in Panama, was heading from Iran to South Korea, carrying 136,000 tonnes of condensed oil, a light oil. That equates to just under 1 million barrels, worth around $60 million, based on global commodity prices.”

Until today, the body of the Deck Sailor who fell from a vessel that provided services to Petrobras has not been found, see the full article with video of the report by accessing the article here too.

Tags:
previous post 10 offshore, onshore and civil construction companies disclose emails for another sequence of vacancies
next post Porto do Açú Consortium is out: Andrade Gutierrez and Siemens are receiving CVs for the construction of the thermoelectric plant