With 4 units in the final stages of construction, Teekay Offshore has opened its hiring phase for various positions on its tankers.

The professionals required by Teekay offshore are mechanical conductors, bobbers, chief engineers I and II, department heads, foremen, sailors, oilers, cabin crew, cooks and waiters. It is mandatory that all people who apply for the positions mentioned above, must have all maritime documents up to date, master English and Portuguese well, previous experience in maritime units in tankers or FPSO's, but if you don't have them, send anyway, Teekay will provide opportunities for beginners alike.

With production of the pre-salt fields in full swing and auctions for new exploratory blocks scheduled for the 2nd half of 2017, Teekay's goal is to remain in operation for at least 10 years in Brazil, with plans to expand the contracts as the production of these assets are coming to fruition.

AT THE REQUEST OF TEEKAY, CANDIDATES MUST SUBMIT THEIR CURRICULUM IN THE SESSION CAREERS FROM THE OFFICIAL WEBSITE https://teekay.com/people/careers/external/

If you liked this news, then come to the article in which a consultancy just opened vacancies for rigs and platforms on 04/17/2017.

But what are tankers?

Tankers or Shuttle Tankers), have the sole and exclusive purpose of transporting liquids, for which most of its use is destined for the oil and gas, chemical products and production inputs industry. Its load capacity varies greatly from unit to unit, but they always start at the base of 100 tons up to hundreds of thousands, depending on the type of service and transport for which it was intended.

The largest tanker ever made by man was the gigantic Knock Nevis built in Japan. Its size was so large (about 458.4) that it was forbidden to dock anywhere. Harbor of the planet. The way they found to unload the oil contained in it to the refineries, was to hire smaller ships to do so. Its main itinerary was to transport oil from the Persian Gulf to the United States, and to get from one end of the ship to the other, employees had to ride bicycles on it. It was dismantled in 2010. Curious, isn't it? 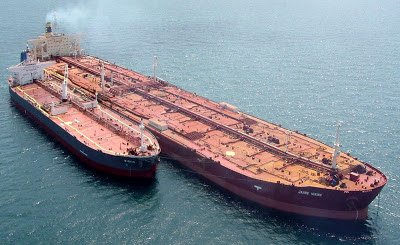 How an oil tanker is made