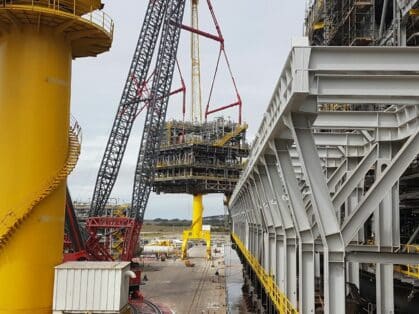 Petrobras is the world leader in FPSO operations and is the company that will install the largest number of platforms of this type in the next five years; units will be installed in the pre-salt and post-salt

Petrobras informed the Market in a relevant fact that the recent discoveries of oil in the pre-salt, in the areas of Alto de Cabo Frio Central and Aram, open a horizon of new exploratory opportunities for Brazil. The discoveries are the result of intensified exploratory efforts by the Brazilian oil company, which has planned to invest US$ 5.5 billion in this segment over the next five years. This statement was made by the executive manager of Strategy at Petrobras, Eduardo Bordieri, who presented the panel “Petrobras perspectives on O&G double resilience” during the Annual Breakfast Offshore of the Brazil-Texas Chamber of Commerce (Bratecc), on 4/05, a parallel event to the Offshore Technology Conference (OTC) in Houston (USA).

Of the total investments programmed by Petrobras' Strategic Plan in new exploratory frontiers, the Southeast Basins (including the pre-salt prospects) will receive 58% of the resources; the Equatorial Margin, 38%, and the other areas, 2%. "All Petrobras investments seek dual resilience: both economic (considering viable projects from a financial point of view with the price of Brent at US$ 35 in the long term) and environmental (projects with low carbon emissions)”, summarized Bordieri.

Petrobras will put into production 15 FPSO-type (floating oil production, storage and transfer system) platform ships in the next five years. Of this total, ten will be installed in the pre-salt and five in the post-salt. According to Bordieri, the company has already put a total of 32 FPSOs into operation over its most recent history, a record in the oil industry. “Today Petrobras is the leader in the operation of FPSOs in the world and is the company that will install the largest number of platforms of this type in the next five years, generating value for our stakeholders”, said Bordieri.

Another highlight of the lecture was the expressive reduction in the construction time of wells in the pre-salt, with the maintenance of operational safety. Between 2018 and 2021, the company reduced this period from 100 days to less than 70 days, on average. Petrobras plans to intensify these efforts and achieve, by 2024, a reduction of 14% within that period – with the contribution of its drilling and completion efficiency program, in addition to the use of new, faster and more optimized well configuration models.

“Any reduction in well construction time is synonymous with the preservation of operational safety, cost reduction associated with the generation of value. To give you an idea, well activity accounts for around 30% of investments in the Exploration and Production area. Therefore, we pursue the best results in this activity, preserving safety and optimizing the configuration of wells, as quickly and efficiently as possible, always in accordance with the best safety practices in the industry”, he concludes.

Tags: FPSOPetrobrasPetroleumpre-salt
previous post IEL Bahia announces the availability of new vacancies for research grants related to the areas of engineering and computing
next post Researchers create a film applied to the roof capable of cooling environments without the need to use electricity, eliminating the need for air conditioning