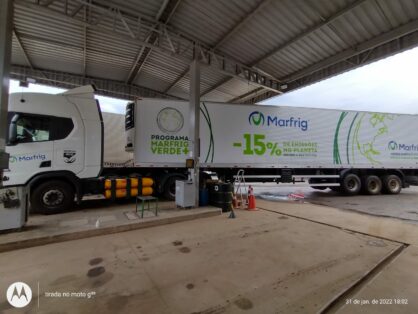 Scania's natural gas trailer, widely used in Europe, is being tested in the interior of São Paulo and in Rio de Janeiro by Marfrig

Marfrig, a global leader in the production of hamburgers and one of the largest beef companies in the world, is implementing, in the testing phase, the first refrigerated natural gas trailer model. Serving the cities of Itupeva and Promissão, in São Paulo, in addition to the city of Rio de Janeiro, this truck generates around 15% less pollution in relation to a diesel oil truck, a considerable advance in the sector, taking into account the logistical challenge preventing the greater dissemination of this technology: the difficulty of supplying natural gas.

“The use of alternative, less polluting fuels represents an important environmental gain for Marfrig, the population and the planet. The implementation of the sustainable trailer is part of the company's commitments and efforts to reduce, in practice, the environmental impact at all stages of the business”, says Luciano Alves, Marfrig's logistics director.

What are the ecological impacts of Marfrig's natural gas truck?

The natural gas trailer that Marfrig is using is a Scania model, which, according to the manufacturer's website, has been widely used in several operations around the world, for example by Delgo Transport in Spain.

Like Marfrig, this company from Valencia works with refrigerated transport, and as soon as Scania announced that it was working on a model of a natural gas trailer, this company decided it was time for the modification.

Today, Delgo works with 50% in its fleet with trailers similar to the ones Marfrig is testing, and the results seem to be positive.

The company's managing director, Félix González, even left a statement on the automaker's website.

“When we learned that the scania was making gas trucks, we took 80% from the decision to acquire them,” he says. “And the results we had were much better than expected. Better consumption levels and, of course, less emissions.”

This is undoubtedly an important step for the company towards a more sustainable future with fewer threats to the environment.

Who is Marfrig? What other sustainability actions has it been doing?

Marfrig is a 100% Brazilian company, with operations in several countries in the Americas and products in more than 100 countries. Specializing in meat and frozen foods, but already producing plant-based meat substitutes, Marfrig is the world leader in the production of hamburgers and is one of the largest producers of beef protein, in terms of quantity.

In addition to all this success, Marfrig is still widely recognized for its sustainability actions.

The company, being in an area that has a great ecological impact, controls extremely rigorously both the natural resources used in its production and the emissions throughout its production chain.

Another constant concern of the company is the welfare of the herd. The company has been working in accordance with the recommendations of the WAP (World Animal Protection) in search of constant optimization of animal welfare parameters.

All of this, of course, translates into more quality and differentials for the company and its investors. Marfrig is one of the companies listed in the B3 Corporate Sustainability Index (ISE), with its shares being part of the 16th ISE portfolio, in force in 2021.

It is possible to check even more information about the company's actions in the area specially dedicated to sustainability of the company's website.

If you like to keep up to date with market news, stay tuned to CPG!

Tags: CNGLogistics and TransportMarfrigSustainability
previous post Oil and gas sector should receive investments of R$ 175 billion by 2030; says IBP
next post Brazil will host the largest event in the fertilizer market in Latin America, by Abisolo: New technologies and business opportunities will be presented, so that we depend less and less on other countries

Jordan Florio de Oliveira
Specialist in multidisciplinary content marketing. My mission is to communicate in an intelligent and interesting way, simplifying the complicating and always in search of the truth.
share