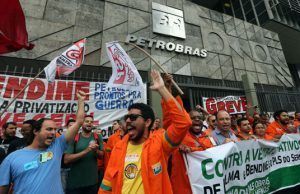 the announcement of Petrobras on the privatization of the refineries Presidente Getúlio Vargas (Repar-PR), Alberto Pascoalinie (Refap-RS), Abreu e Lima (PE) and Rlam, in Bahia, caused a lot of confusion this week and unleashed the fury of unions and oil workers linked the state-owned company, shortly after Pedro Parente's pronouncement. Oil workers are already organizing to carry out a national general strike in repudiation of this measure, in an attempt to reverse this decision.

The president of Sindipetro PR/SC, Mário Dal Zot, declared war against Pedro Parente and promises never-before-seen strikes. At the moment, meetings and assemblies are taking place to decide what would be the best ways to launch the strike, which according to Mario, can be indefinitely.

Fernando Maia, current director of the FUP, wants to carry out a strike equal to or greater than the one that took place in 1995, which also aimed at an embargo on possible privatizations of Petrobras. At that time, who was in the presidency of Brazil was Fernando Henrique Cardoso. The oil workers joined the strike and interrupted activities on the platforms, administrative units of the Petrobras, distribution terminals and refineries.

The launch of the national general strike against the privatization of Petrobras refineries, must take place after the meetings between April 30 and May 12, according to the FUP. The Keuri Consortium Method formed with the aim of finalizing the Comperj works, releases an official statement about the start of hiring and the ways in which the CVs for the construction of the UPGN will be received, read the article here and get the information first hand.

Tags:
previous post UTC Engenharia is back: Petrobras releases the company for public tenders
next post Offshore Human Resources looking for a professional in Electrical