Multinationals in the oil sector gather at the Avant Premiére event 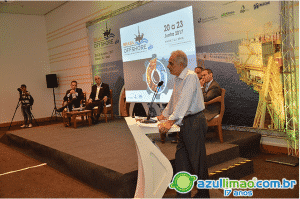 Event that precedes Brasil Offshore 2017, brought together large multinationals in the oil sector in order to reach a final conclusion

With absolute exclusivity, the Click Petróleo e Gás page was invited to the great pre-launch event of Brasil Offshore 2017, the Avant Premiére.

We were with the biggest companies and authorities in the world of the oil industry, who are relentlessly fighting for this branch to attract investment and generate jobs again. In the following paragraphs, you will find out what the main representatives of the oil industry think about the crisis, possible solutions and the recovery of the economy.

In the first part of the event, the famous journalist and anchor of the newspaper O Globo, William Waack, was responsible for presiding over the lecture and managing the debates and clashes of the entities that were represented there. He started his speech focusing on the premise that everything that would be uttered in his words would be free and his total responsibility, and that his objective was only as a speaker and not a representative of the company he works for (Globo).

In his words, he says that the crisis is a reflection of the government disservice over the years, simply because social spending is being greater than the government can collect. Ironically, he dubbed this moment “The Moment of Truth”. We all already knew that this moment would come sooner or later, but not so soon, right?

Waack proved to be an outspoken opponent of the PT government, he spoke mercilessly and that it hurts even to those who must hurt! With harsh words and criticism of our managers, he says that other countries see our situation as depressing because of semi-illiterate managers (do I need to say the name?) and that they are not enlightened about the economic issues that the country lives.

Soon after, the vice president of Reed Exhibitions, Paulo Octávio, who is responsible for organizing the Brasil Offshore 2017 event, says he is very happy because despite the inglorious moment that the country is experiencing, Macaé is still at the center of projections for business in the sector. of oil and gas for many years to come. Of the 40 years of exploration and production in the Campos Basin, there have been 20 Brasil Offshore events organized by Reed to date.

The president of the Brazilian Institute of Oil, Gas and Biofuels (IBP), said in the lecture that Brazil is very favorable geologically in the oil sector and said that the problem is not the lack of it, but external factors. In several conversations and meetings with executives abroad, he says that Brazil is still highly sought after and quoted around the world, because few countries in the world manage to produce 50,000 barrels of oil per day in individual wells, and on the scale of interest to foreigners. We are 5th on that scale. The IBP says that preliminary studies indicate that Brazilian oil and land reserves could reach an incredible 200 billion barrels. Using a bit of sarcasm, he said that the "age of oil" will come to an end, due to other alternative energy sources and that agent will not be able to produce all the fossil fuel available in our reserves.

Asked that we have so many oil reserves and there are no investments, the president of the IBP says that the government has many high fees and that we need more single operators besides Petrobras, only in this way to maximize the business in this branch of the industry. Companies want to invest, but are reluctant to make additional investments because Rio de Janeiro, which concentrates most of the business, constantly imposes new and unconstitutional taxes.

And to end the round, the main representative of Abaspetro, José Firmo, who acts as an agent for more than 50 oil companies, emphasizes that the level of technical training is the key for those who want to enter this field. He says if bada is done now, he says about 500,000 jobs will cease to exist or be lost. It will be necessary to change the local content rules to guarantee future investments.

Doctor Aluízio, who is the mayor of the National Capital of Petroleum, was a little more direct and incisive in saying that the population (the common people) does not understand and does not want to know about technical details, what they see is these projects and these economic misfortunes materialize in the form of jobs, security and economic stability. William Waack asked the mayor if she wins elections with this speech and he without blinking said "YES". His efforts to balance the city's accounts, despite much criticism, resulted in his re-election in 2017.
Many multinational companies with their respective representatives who were there really enjoyed the event and were very optimistic and anxious for Brazil to return to being the country of joy and wealth. I don't remember all of them, but the companies that were present were Baker Hughes, Cameron, Chevron, Shell, Engevix, Technip, Odebrecht, Modec, FMC, Petrobras and a lot more that I didn't have time to write down. In other words, “only big dog”!

As you can see, dear readers, a true task force involved in resuming the economy in the sector, what is lacking is just the political will to make the needs of local content more flexible and tax companies less, because despite the abundance of oil, Exploring it in deep waters is expensive and requires a lot of technology, unlike in the Arab Emirates, where you can find oil within a foot of the ground.