Multinational Saint-Gobain completes works on a new factory in Porto Velho (RO) and opens a branch focused on the production of quartzolit, a material used in civil construction

per Ruth Rodrigues
-
–
in Industry and Civil Construction 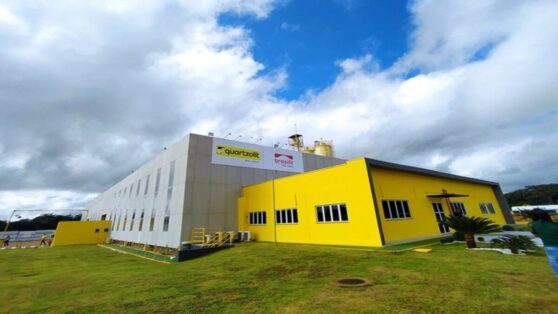 Works at the factory of the French multinational, Saint-Gobain, are completed in Rondônia for the sale of civil construction materials, especially quartzolit mortar. Source: Reproduction

Quartzolit mortar is a material highly used in civil construction and the completion of the construction works of the new Saint-Gobain factory in Porto Velho marks the beginning of the company's new phase with the production of the product in this branch.

Aiming at an expansion in the civil construction segment with the sale of quartzolit material, Saint-Gobain announced last Tuesday, (19/04), the completion of the construction works of its new factory and the opening of the branch, which is located in Porto Velho and is the company's new bet for sales growth during 2022 in the region.

Video: Learn a little more about the Saint-Gobain Group

Saint-Gobain is a giant in the civil construction segment and has its main focus on the manufacture and sale of quartzolit material, a type of mortar widely used in different construction projects to ensure more resistance to constructions. Now, the company has completed the construction works of its new factory located in Porto Velho, Rondônia, and announced the opening of the branch in the region this week, as a way of accelerating sales in the state.

The new Saint-Gobain factory has a prime location and strategically chosen, as it is the headquarters of the Brasilit Distribution Center that serves several cities in the northern region of the country. In this way, the company intends to expand the sale of the material and reach new markets for works in the region, which has a strong potential for the consumption of this product in civil construction projects. The branch will also have a team specialized in the sale of quartzolit to make this the company's main focus in Porto Velho.

In addition, the land where the works of the new factory were carried out was acquired by the French Group in 2015 and has 65,000m². The location also currently has, in addition to the warehouse and shipping, an office built entirely in Light Steel Frame, using products from other brands of the Group such as Placo, Isover and Sonex. These products aim to make civil construction increasingly sustainable and committed to the environment and are part of another strategy of the company's branch.

The civil construction sector is one of the most resilient in the entire national market and, according to data from the Brazilian Chamber of Construction Industry (CBIC), it achieved an increase of 9.8% in the sale of new residential units in Brazil over the year. of the year 2020, even with the beginning of the pandemic in an intense way in Brazil. Now, for the year 2022, the agency expects a growth of up to 10% against a 3% increase in GDP, which guarantees space for the new Saint-Gobain factory to grow even more.

Thus, Renato Holzheim, General Manager at Saint-Gobain, commented that “The Saint Gobain Group is very proud to announce the opening of the new Quartzolit factory in Porto Velho. The positive impact that our plant will generate in the region will bring new direct and indirect jobs, in addition to specialized training for employees to perform their duties with safety and respect on a daily basis”.

The executive concluded by stating that the segment is experiencing a very positive moment and that the completion of the factory works and the opening of the company's new branch mark a new step for the commercialization of quartzolit material in the region.