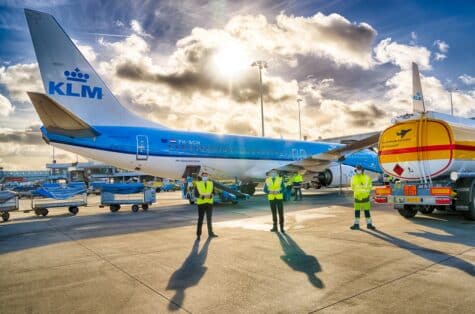 The companies will, by 2027, establish a domestic supply chain that handles everything from raw material procurement to manufacturing and distribution, but the initial focus of the partnership is on accelerating production of a renewable jet fuel.

Mitsubishi and Eneos Holdings jointly announced on Monday (18) that they will produce renewable fuel for the aviation market (SAF), which significantly reduces carbon dioxide emissions from aircraft. Companies will, by 2027, establish a domestic supply chain that handles everything from raw material procurement to manufacturing and distribution. The announcement confirms the previous report released by Nikkei on the matter.

With the regulations of decarbonization becoming more stringent around the world and competition for SAF increasing, the two companies aim to reduce their dependence on imports by establishing their own mass production system.

SAF is derived from biomass, like used cooking oil and plants. It is blended with jet fuel derived from crude oil. With it, carbon dioxide emissions from aircraft can be reduced from 70% to 90% compared to conventional fuel.

Worldwide, in 2020, 63 million liters of SAF were used, less than 1% of the total amount of jet fuel used. It is estimated that the introduction of fuel regulations will require around 13 billion liters of SAF in Japan, the US and Europe alone by 2030.

The Japanese government has set a target of replacing 10% of used jet fuel annually (about 1.3 billion liters) with SAF by 2030. The plan is to build a facility to receive SAF at Chubu International Airport in autumn 2022. All Nippon Airways (ANA) and Japan Airlines (JAL) have partially introduced SAF but still rely on imports.

Mitsubishi and Eneos Agreed to Create a Domestic Supply Chain

With the government's objective in mind, Mitsubishi and Eneos agreed to create a domestic supply chain for the large-scale sale of the renewable fuel. Mitsubishi will handle the procurement of raw materials and distribution. In addition to its own grain and chemical chains, the company will also consider incorporating the purchasing networks of group companies such as Mitsubishi Foods and Lawson.

Eneos will use some of its refineries for production. The production volume has not yet been determined, but the expectation is for hundreds of thousands of tons per year. The partnership will form the basis of the government's 2030 target. SAF will be provided to airlines arriving and departing from airports in Japan. Specific details of the partnership, such as whether a new company will be established, will be decided later.

The production cost of SAF depends on the raw materials used, but averages from 1,000 yen to 2,000 yen (US$ 8 to US$ 16) per liter, up to 10 times higher than regular jet fuel. When importing, logistics and other costs are also taken into account. Carbon dioxide emissions from transporting the fuel are also an issue. The two companies will establish a domestic mass production system for AFS to significantly reduce costs and lessen obstacles to widespread use.

Organization decides that airlines should not increase their CO2 emissions

The International Civil Aviation Organization, which counts 191 countries and regions as members, in 2021 decided that airlines should not increase their carbon dioxide emissions above 2019 levels.

It plans to make the restriction mandatory in 2027. If the ICAO enforces the rule, planes that have not taken steps to reduce carbon dioxide emissions may have to leave the service. Considering this international rule, Mitsubishi and Eneos intend to start mass production by 2027. Europe and the USA currently lead in the production of SAF.

The Finnish Neste has already marketed its product and counts ANA and Delta Air Lines among its customers. Fulcrum Bioenergy in the US began production in fiscal 2021 in partnership with JAL. Lanzajet, a US company, has received investments from Microsoft, Shell and others and will start production in the state of Georgia in 2023.

In Japan, JGC Holdings, Cosmo Oil and others plan to build a commercial plant in 2025. Tokyo-based company Euglena is also moving ahead with production trials of SAF using euglena, a type of freshwater flagellate, and other raw materials. Japanese companies lag behind their European and North American competitors in terms of production technology and cost, and have not yet paved the way for mass production.