MIT scientists develop portable, filter-free water desalinator that can be carried in a briefcase 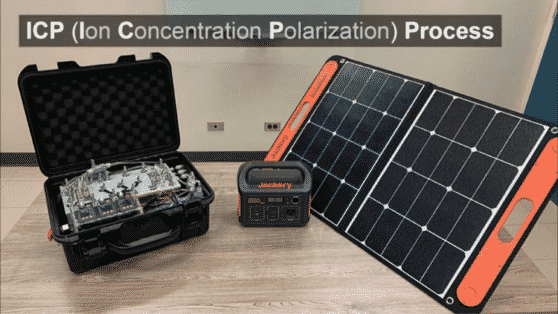 Scientists Junghyo Yoon, Hyukjin J. Kwon, SungKu Kang, Eric Brack, Jongyoon Han recently reported in the journal Environmental Science & Technology the development of an incredible water desalinator, which can be carried in a suitcase and desalinates the liquid directly in a glass, even with superior quality to the standards required by the World Health Organization. To offer total independence, the prototype is fully functional off the grid, with a battery and a mini solar panel, which can be stored together with the rest of the desalinator. This can become a solution with a high social impact, and can be used for a multitude of situations where the need for potable water is critical.

Learn more about this desalinator, because it is relevant and can become a fundamental tool for various emergency situations or even for environments where potable water is rarer than marine water, such as on ships.

This portable desalinator has as its main differential the way in which the water is desalinated.

The portable desalinator being presented uses a desalination process made entirely by an electric current, which totally eliminates the need for filters and makes it work almost infinitely, depending only on your battery charge and a maintenance of parts, which is much less frequent than changing filters.

This makes this machinery very useful, for example, on isolated islands, helping refugees from wars or ecological catastrophes, ships and other environments where brackish water is more common than drinking water.

For now, his biggest restriction is that the sea water that is used is clean. As he does not use filters, he cannot remove some impurities from the water.

Instead of working with water being passed through filters under pressure, this desalinator works with two electrified blades in different polarities receiving a flow of water. In this way, one of the blades is positively charged, it was only betraying the salt and other impurities, such as bacteria and the like, leaving for the other blade, of negative polarity, attracting only clean and pure water.

This first process ends up not eliminating all the impurities, making a second process, called electrodialysis, necessary. After this second stage of filtration, the portable salinizer eliminates the rest of the salt and those that were not eliminated in the first stage of water treatment.

“This is really the culmination of a journey that my group and I have been on for 10 years. We worked for years on the physics behind individual desalination processes, but putting all these advances in a box, building a system and demonstrating it in the ocean, this was a very meaningful and rewarding experience for me,” said Professor Jongyoon Han, from MIT.

One of the biggest challenges that the team faced in the process of creating this portable desalinator was precisely the fact that the technologies needed to be miniaturized so that the result was a machine capable of being easily carried to hard-to-reach places.

All desalination processes are carried out by small, efficient and resistant components, still working with a low power water pump, which reduces energy consumption in its operation, thus making this process one of the most economical for desalination of water from autonomous way.

Despite being extremely optimistic results, the desalinator is not yet approved, because now it needs to go through the most rigid process, the use of real sea water in its desalination processes.

This is because for these first tests samples of clean marine water were used, which may not be the reality of all environments where it will be needed.

means that the next rounds of testing the desalinator will be much more demanding, with water samples from real environments where it might be needed.

Tags:
previous post Reduction of IPI causes drop in car prices 0 km, according to KBB survey
next post Consórcio AeroGru and Marcopolo sign a contract to supply state-of-the-art vehicles that will be part of the People Mover at Guarulhos Airport

Jordan Florio de Oliveira
Specialist in multidisciplinary content marketing. My mission is to communicate in an intelligent and interesting way, simplifying the complicating and always in search of the truth.
share