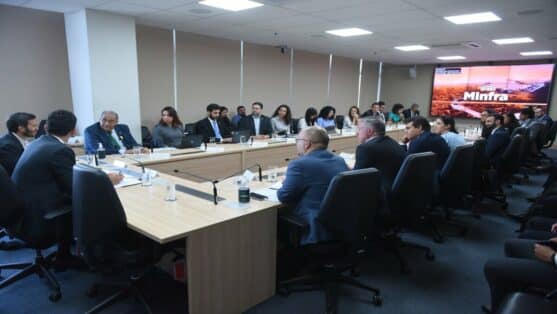 Last Wednesday (20/04), the Ministry of Infrastructure met with the Special Secretariat of the Investment Partnership Program of the Ministry of Economy and BNDES to discuss the privatization of three ports located in Codeba (Companhia Docas da Bahia) and what strategies would be used to attract new investments and expand the movement of loads in the places after the end of the process.

Meeting on privatization of the ports of Ilhéus, Aratu-Candeia and Salvador, by Codeba, is held by the Ministry of Infrastructure and bodies of the port sector

Thus, according to the Ministry of Infrastructure itself, the purpose of the meeting is to make the project attractive to investors and verify the region's infrastructure needs. The bodies discussed what would be the best strategies investment in infrastructure works in ports so that, at the end of the privatization process, cargo handling operations benefit from this amount applied. This is the ministry's main objective for these and more Codeba ports that will still go through the privatization process over the next few years.

In addition, after the great success that took place in the auction of Companhia Docas do Espírito Santo, Codesa, the Ministry of Infrastructure is increasingly committed to ensuring a correct model for this process. Thus, the Minister of Infrastructure, Marcelo Sampaio, highlighted the importance of the Codesa auction and commented on the Codeba ports that will undergo the same process, stating that “It was a successful auction and in partnership with BNDES, and now, we continue the agenda with the Port of Itajaí, Port of São Sebastião, Port of Santos and Codeba”.

The relevance of Codeba for the region of Bahia and for the national port sector is increasingly discussed between the Ministry of Infrastructure and other bodies such as Antaq itself (National Agency for Waterway Transport). Thus, the ministry intends to take advantage of the current situation of the port sector to expand operations of cargo handling in the ports of the complex with the investments of the privatization process that will be carried out in the places.

The ports of Ilhéus, Aratu-Candeia and Salvador achieved great results and, in the first months of 2022 alone, handled almost 3 million tons of various products, including containerized cargo, fuel and chemicals, wood, charcoal, cocoa and derivatives. In this way, the investment of the Ministry of Infrastructure in the privatization of these ports is focused on these results and on a great expansion capacity after the necessary applications in infrastructure works.

Finally, after holding the meeting with the Special Secretariat of the Investment Partnerships Program of the Ministry of Economy and BNDES, the ministry stated that the forecast for public notice and auction are for the fourth quarter of 2023, with the signing of a contract in the first quarter of 2024 for the start of investments in Codeba ports.

Tags: loadscodebainfrastructureportsPrivatization
previous post One of the largest hydroelectric plants in Santa Catarina will be inaugurated by the end of the month and promises to serve more than 400,000 homes
next post Manaus City Hall announces project to install solar energy panels in the city, to save up to R$ 6 million in electricity costs